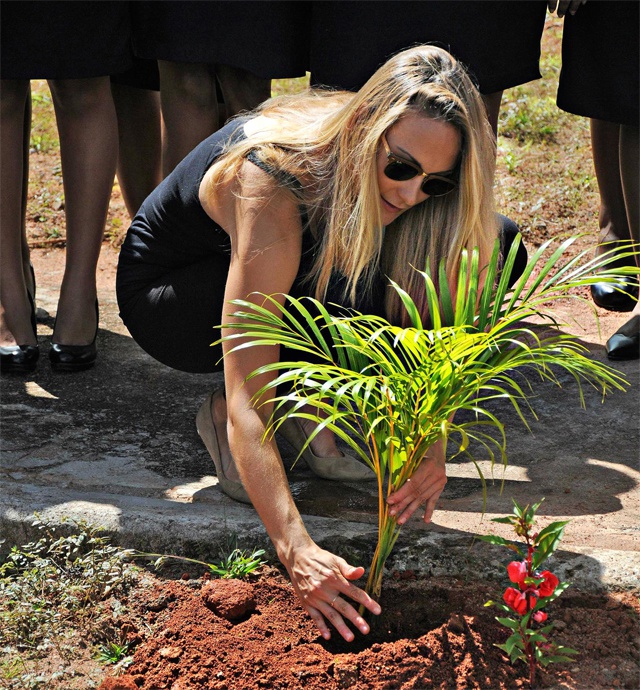 Cassandra planting a tree in Seychelles. The tiny 115-island archipelago in the western Indian Ocean was the 139th country she visited as part of her quest to become the first and fastest woman to travel 196 nations. (Vanessa Lucas, STB)

(Seychelles News Agency) - An American woman aiming to become the first female to travel to 196 countries in record time hopes to come back to her 139th stop – the Seychelles islands -- to celebrate her achievement.

Cassandra 'Cassie' De Pecol was in the tiny 115-island archipelago in the western Indian Ocean between July 21 to 24, one year after setting off on what is known as Expedition 196.

Through a Facebook interview with SNA on Monday, De Pecol described Seychelles as “nothing but stunning in both nature and culture.”

“I really hope to be back immediately after I finish this expedition in order to celebrate,” she added.

De Pecol started the ambitious journey on the small island nation of Palau on July 24, 2015. Her aim is to set a Guiness World Record as the fastest and first woman to visit all 193 sovereign nations plus Taiwan, Kosovo and Palestine.

“It’s never been done and it’s always been a goal for me to break through barriers when it comes to women’s achievement and pushing the limits of what women can do in a 'man's world,'” De Pecol told SNA.

Spending two to five days on average in each country she visits, the 27 year-old traveler says she uses whatever means of transport that is most convenient -- from public transportation, planes, trains, busses, boats, and taxis.

De Pecol says she is receiving the support of several organizations, including the International Institute of Peace Through Tourism and Skal International, which promotes global tourism and friendship, to plan her meetings in the different countries while several groups are also helping to fund her expedition.

For the American national, it’s not only about coming and going from one place to another but her stops are also about promoting peace through sustainable tourism, meeting with students and planting trees to signify regenerative tourism and to offset her carbon footprint.

“I have a personal duty to educate the world and youth on what sustainability is and how we can facilitate peacefulness among nations through tourism. The goal is to promote the goodness and kindness of nations while educating students on how they can also promote peacefulness throughout their career in sustainable tourism.”

“If I am not meeting with any students or dignitaries, then I try to collect water samples from waterways to send to the lab over at Adventurers and Scientists for Conservation to test for the presence of microplastics.”

From Seychelles, De Pecol who has been travelling alone for the past year, headed to the neighbouring Indian Ocean island of Mauritius. She hopes to complete Expedition 196 by July 2017 and once done travelling the world, she plans to produce a documentary.

“An educational one -- that will hopefully educate students both in high school and university (studying hospitality/tourism) of the advancements of women empowerment and regenerative tourism. Expected completion is early 2018, if all goes well.”

Single, with no kids, De Pecol who is originally from Connecticut in the US now lives in Los Angeles. She loves sports including triathlon and is also into web design and branding.

Several men are known to have travelled the same 196 countries, doing it in different timeframes, although there is no documentation that the same feat has ever been achieved by a woman.