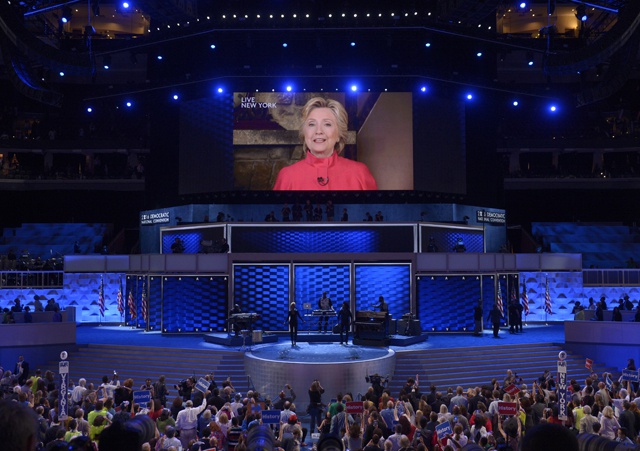 (AFP) - Hillary Clinton made history Tuesday by becoming the first woman to win the presidential nomination of a major US political party, securing the backing of Democrats at a rowdy convention in Philadelphia.

After a tumultuous convention opening which saw Sanders and Clinton supporters trade jeers and chants, cheers erupted as Clinton passed the 2,382-delegate threshold needed for the nomination, setting up a showdown with Republican Donald Trump in November.

Although the outcome was virtually a foregone conclusion, the state-by-state vote saw rowdy displays on the convention floor.

A handful of diehard Sanders delegates fumed over their candidate's defeat, but they were drowned out by ecstatic Clinton supporters. Several wept and embraced.

After his delegates had been counted, Sanders took the floor in a bid to unify the party.

"I move that Hillary Clinton be selected as the nominee of the Democratic Party for president of the United States," he said to deafening cheers and finally a chorus of "ayes."

Delegates thrust placards in the air, forming a mosaic of "H's" across the arena.

"It's historic, I haven't taken it all in yet," Senator Tammy Baldwin, her voice cracking, told AFP.

Clinton's nomination was formally put forward by Senator Barbara Mikulski of Maryland, the longest serving woman in the history of the US Congress. Civil rights icon John Lewis, a congressman from Georgia, seconded the nomination.

The Clinton camp is now looking to unite the party's factions.

Vice President Joe Biden, who addresses the convention Wednesday along with President Barack Obama, dismissed concerns the party was not uniting behind Clinton.

"We've got to show a little class and let them be frustrated for a while. It's OK," he said of Sanders supporters as he toured the convention arena Tuesday.

Sanders meanwhile called on his supporters to get behind Clinton.

"In my view, it's easy -- it's easy to boo, but it is harder to look your kids in the face who would be living under a Donald Trump presidency," he said.

Trump took the usual shots at Clinton during a speech in Charlotte, North Carolina, calling her "Crooked Hillary" and charging that her use of a private email account as secretary of state "put America's entire national security at risk."

Several mothers of African-Americans who were victims of gun violence or police-involved deaths took the stage to back Clinton, as delegates chanted "Black lives matter."

"Women are going to be the reason you're not elected president," Richards said.

Chief among Clinton's surrogates of course is the former president Bill Clinton, who was set to take the stage during primetime to hail his wife as a "change-maker," a campaign official said.

The 69-year-old Democratic icon and two-term president remains a powerful force on the national stage.

Presidents have spoken at conventions in support of other presidential hopefuls, and people have spoken about their campaign spouses. But Bill Clinton will be the first in history to combine the two.

But Clinton also will have the unstated mission of mending fences with Sanders' army of vocal young activists.

- From 'political revolution' to revolt -

Michelle Obama appeared to soothe some of the Sanders zealots Monday night, as she delivered a heartfelt endorsement from one first lady to another and hailed the inspirational prospect of a first female US president.

But despite Sanders calling on his flock to get behind Clinton, his self-styled "political revolution" appears to have transformed into a revolt.

Sanders himself was booed by some delegates Monday, and again Tuesday when he called for her to be declared the nominee.

"There's no unity in the party," she said of the Clinton camp.

Instead of opening a dialogue with Sanders delegates, "They're talking at us, they're telling us to fall in line," she added.

"We didn't come to this convention to just fall in line."

General » Be a reporter: Write and send your article » Subscribe for news alert
Tags: Hillary Clinton, presidential nomination, US, Democrats