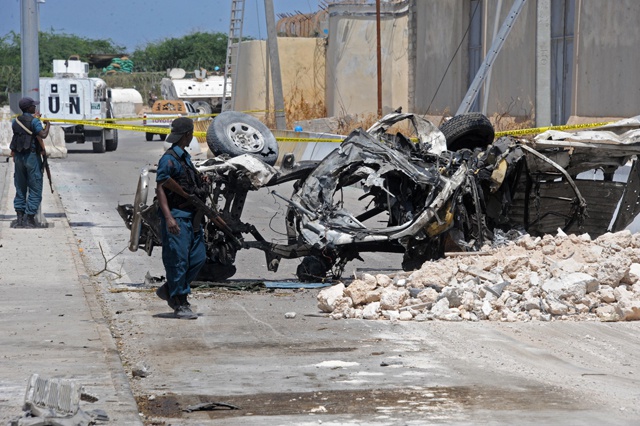 Somali soldiers pass near the wreckage of a car bomb outside the UN's office in Mogadishu on July 26, 2016. (MOHAMED ABDIWAHAB / AFP)

(AFP) - A former Somali MP who joined the Shabaab group in 2010 was one of two suicide bombers who killed 13 people near a United Nations and African Union base, the militants announced Wednesday.

Car bombs driven by suicide attackers exploded on Tuesday morning near Mogadishu's airport, one of which went off 200 metres from the base, killing mainly security staff.

Salah Badbado, 53, served in Somalia's parliament from 2004 until 2010, when he declared at a press conference he was leaving politics to join the Somali al-Qaeda affiliate.

"Salah Nuh Ismail known as Salah Badbado was among the braves who have carried out the attack on Halane military base," the group said in statement released on the Telegram app and their Andalus radio station.

"He was a former lawmaker but he has repented from the apostasy in the year 2010 when he publicly announced defecting from the apostates," the Shabaab statement said.

The attack was condemned by the African Union and the United Nations, which said that none of its personnel were among the confirmed dead.

The group's radio station released an audio message purportedly recorded a few hours before the former MP carried out the attack, in which he is heard announcing an imminent suicide strike.

"This suicide task we are going to is for the sake of Allah and it is a religious duty. We have chosen to please Allah and to harm the infidels more than they have harmed the Muslim nation," the former MP said in the audio message.

Somali security officials were yet to confirm the bomber's identity early on Wednesday.

The Shabaab group is blamed for a string of bloody assaults in Somalia and neighbouring Kenya, and is fighting to overthrow Mogadishu's internationally-backed government.

Its fighters were forced out of the capital five years ago but continue to carry out regular attacks on military, government and civilian targets.