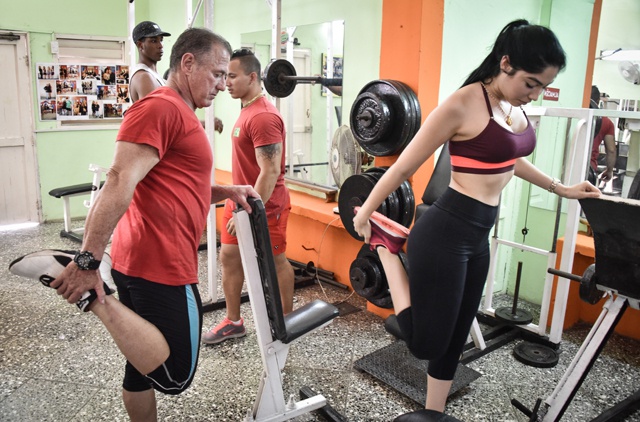 People exercise at a gym in Havana on May 17, 2016. Living a sedentary lifestyle is associated with more than five million deaths in the world every year, the researchers say. (ADALBERTO ROQUE / AFP)

The total was divided between $53.8 billion in healthcare spending and $13.7 billion in lost productivity, according to a study published in The Lancet medical journal.

The research relied on economic and population data from 142 countries, representing 93 percent of the world's population, its authors said.

But the figure was likely an underestimate as the data covered only five diseases -- coronary heart disease, stroke, type 2 diabetes, breast cancer and colon cancer -- at least the percentage attributable to physical inactivity.

The "cost calculations are based on conservative estimates, and the true cost may be even higher," said a statement.

The paper was the first to estimate the monetary cost of the global "pandemic" of inactivity, and was part of a special series timed for release ahead of the August 5 opening of the Rio Olympic Games.

Living a sedentary lifestyle is associated with more than five million deaths in the world every year, the researchers said.

Of the total estimated cost, $31.2 billion was tax revenue lost to public healthcare spending, $12.9 billion in spending by the private sector, including health insurance companies, and $9.7 billion in direct medical costs for households.

The amounts were listed in "international dollars" -- the equivalent of what an American dollar could buy in the United States in any given year.

The burden for rich countries was proportionally higher in money terms, while for poor and middle-income countries the cost was mainly in disease and premature death, the study found.

"Generally, poorer countries don't have their health needs met due to less developed health and economic systems," said Melody Ding from the University of Sydney, who led the research.

As these countries develop economically, "so too will the consequent economic burden, if the pandemic of physical inactivity spreads as expected," she said.

A second study in the series said people who sit for eight hours a day may cancel out the increased risk of death this carries by doing at least an hour of exercise per day.

The World Health Organization advises 150 minutes or more of physical activity per week -- much less than the daily 60 minutes recommended by the study, which analysed data from over a million people.

"Examples are brisk walking at five kilometres per hour (3.1 miles per hour) or bicycling at 16 km/h." Cooking, for example, does not count.

Only about a quarter of people in the analysis did an hour or more of physical activity per day, the authors found.

"For many people who commute to work and have office-based jobs, there is no way to escape sitting for prolonged periods of time," said Ekelund.

"For these people in particular, we cannot stress enough the importance of getting exercise, whether it's getting out for a walk at lunchtime, going for a run in the morning, or cycling to work."

If an hour a day is impossible, "then at least doing some exercise each day can help reduce the risk."