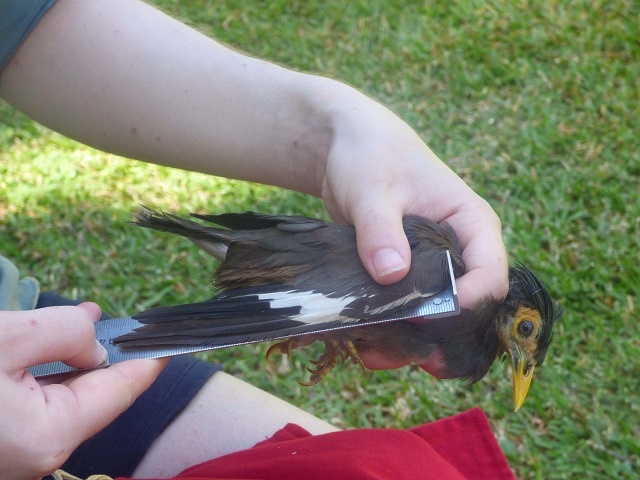 University of Reading students and volunteers from the not-for-profit organisation the Green Islands Foundation, GIF have kick-started a project aiming to rid North Island of the invasive Myna. Similar projects which failed to completely eradicate the birds were implemented in 2005 and 2012. (North Island)

A new project that aims to rid the Seychelles’ North Island of the invasive Myna bird is under way, with a secondary goal of boosting the population of an endemic bird species, conservationists working on the island have said.

The project – the third of its kind to be implemented on the island -- is a collaboration between a group of students from the University of Reading in the United Kingdom and volunteers from the not-for-profit organisation the Green Islands Foundation, GIF.

Some 200 Mynas have already been caught through the project, which started a little over two months ago. It is estimated that over a thousand of these omnivorous, dark brown birds with a yellow beak --thought to have been introduced in the Seychelles archipelago in the 19th century -- roam the island.

“We used the birds that we caught as decoys for other birds but we have also been using baits and over 20 traps that have been placed around the island,” Sarah Fenn, one of the volunteers, said to SNA.

North Island is one of many of the 115 islands of Seychelles -- an archipelago in the western Indian Ocean -- that have been invaded by these cunning avian invaders originally from southern Asia.

The current eradication project follows two others in 2005 and 2012. They failed to completely eradicate the predator birds known for its aggressive behaviour. The birds also compete with other species for food and habitat.

Optimistic about the success of the current project, conservationists are hoping that fewer mynas on the island will lead to an increase in the endemic Seychelles white-eye population (zwazo linet) -- an endangered species once thought to be extinct in Seychelles.

Twenty-five of the endemic birds were introduced on North Island in 2007, one of several islands were such translocation have been done with the hope of boosting the bird’s numbers.

“The population of white-eye has been increasing on a steady pace from 25 to over 100 birds, but it will definitely improve after this project,” Tarryn Retief, the conservation manager on North Island, said to SNA.

North Island, with almost 500 acres of land, lying some 30 kilometres northwest of the main island, Mahe, is home to a private resort favoured by the rich and famous.

Once a typical colonial plantation in the early 1800s, harvesting fruit, copra and spices, the island was eventually abandoned in the 1970s by its owner following the collapse of the coconut industry. The plantation fell into a sad state of disrepair, overrun with weeds, rats and feral animals.

The South African eco-tourism company Wilderness Safaris, which bought the island for $5 million in 1997, has spent many years and plenty of additional cash in its efforts to eradicate the island’s rats, cats, owls and pigs left behind from the coconut farming days.

The conservation team on the island is still constantly battling invasive plant and animal species including the Myna birds, while it also aims to become an oasis for endemic species.

While the University of Reading students and GIF volunteers who also had the assistance of one University of Seychelles student are leaving the island after spearheading the project, the long-term eradication programme will be pursued and monitored by North’s conservation team.

Retief believes that upon completion, North Island could also become beacon for seabirds which had established colonies on the island in the past.

However, the island’s close proximity to Silhouette, the third-largest Seychelles island, where a great number of mynas can be found, is a cause for concern for Chris Feare, an ornithologist also engaged as a consultant for this project.

“Unless there is continued momentum in eradication process and vigilance the birds will continue to find their way to the island,” Feare said to SNA.

Denis Island is an example where a Myna eradication project was dubbed successful in 2015, although there again constant monitoring has to take place to ensure it remains Myna free.