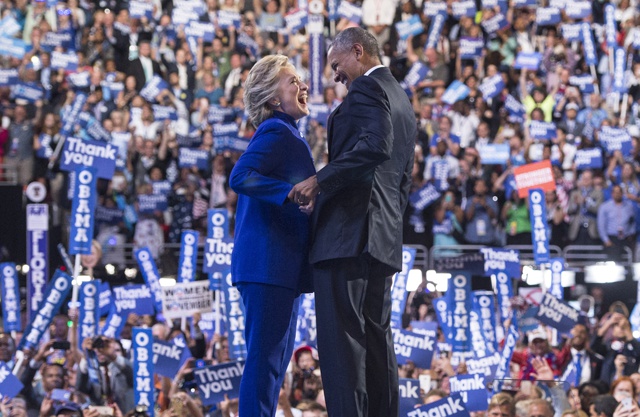 US President Barack Obama is joined by US Democratic presidential candidate Hillary Clinton after his address to the Democratic National Convention at the Wells Fargo Center in Philadelphia, Pennsylvania, July 27, 2016. (MANDEL NGAN/AFP)

(AFP) - Hillary Clinton on Thursday claimed her place in history as she became the first woman presidential nominee of a major US party, promising economic opportunity for all and rejecting Donald Trump's dark picture of America.

The former secretary of state, her hand on her heart, received ecstatic cheers from thousands of delegates as she strode into the Democratic National Convention in Philadelphia and then pledged to be a president for "all Americans."

The 68-year-old Clinton, needing to connect with voters in her biggest moment on the national stage, took aim at her Republican opponent, slamming him as a fear-monger with no policy credibility.

Clinton repeated the convention's theme of "stronger together," declaring that her lifelong goal has been to ensure that Americans can use their talent and ambition to help make the nation stronger.

"And so it is with humility, determination, and boundless confidence in America's promise, that I accept your nomination for president of the United States," she said.

"Herstory," read a handwritten sign held up by a delegate.

Clinton's moment in the spotlight came eight years later than she might have hoped -- in her first White House campaign, she was defeated in 2008 in her party's primary race by Barack Obama.

In an hour-long primetime address, she laid out plans to improve the US economy, stressing that "my primary mission as president will be to create more opportunity and more good jobs with rising wages."

Her efforts will focus particularly on places "that for too long have been left out and left behind, from our inner cities to our small towns, Indian Country to Coal Country," she said.

And in a bold admission for a candidate seeking in large part to build on Obama's policies, she said the economy "is not yet working the way it should."

After a bruising primary campaign against self-declared democratic socialist Bernie Sanders, and even as she savaged and mocked Trump, Clinton extended an olive branch of sorts to her skeptics and critics.

"I will carry all of your voices and stories with me to the White House," she said, adding that her administration would incorporate several policies pushed by Sanders.

"I will be a president for Democrats, Republicans, and independents," she added. "For the struggling, the striving and the successful. For those who vote for me and those who don't. For all Americans."

Throughout Clinton's speech, pockets of revolt emerged, mainly Sanders supporters who shouted out in protest but were quickly drowned out by Clinton supporters chanting "Hillary! Hillary!"

The four-day Democratic convention in Philadelphia has been a parade of party heavyweights -- and some independents -- who have all stressed that the former first lady and US senator is uniquely qualified to be commander-in-chief.

Obama led the charge on Wednesday, stirringly hailing Clinton as his political heir -- and tweeting after her Thursday speech that "she's tested. She's ready. She never quits."

Clinton spoke of the strains that have been placed on US society during the toxic year-long campaign that has featured heated rhetoric from Trump and other candidates.

"Powerful forces are threatening to pull us apart. Bonds of trust and respect are fraying," Clinton said.

"We are clear-eyed about what our country is up against. But we are not afraid," Clinton will add. "We will rise to the challenge, just as we always have."

Clinton also rejected much of the Trump rhetoric that has been a constant on the trail, and his policies that critics warn discriminate against some Americans and would make the country less safe.

"He loses his cool at the slightest provocation," Clinton said.

"A man you can bait with a tweet is not a man we can trust with nuclear weapons."

The pair will face off in their first presidential debate in late September.

Clinton faces a major trust deficit among a US public that has followed every Clintonian turn of the past quarter century. Rocked by an email scandal that refuses to die, she is now about as unpopular with voters as her Republican rival.

Her remarks signal a plan to focus attention on down-and-out communities that have felt ignored by the slow and erratic economic recovery.

After her speech, Clinton and running mate Tim Kaine will seek to carry her momentum straight onto the campaign trail Friday, taking a three-day bus tour into Rust Belt communities in swing states Pennsylvania and Ohio.

Helping Clinton with her task of appearing as the steady hand at the tiller were retired US military generals, lawmakers and even Republicans furious over the rise of Trump.

- Pitch to middle America -
While Clinton must play to the party's base -- and seek to soothe bruised Bernie Sanders supporters -- a key mission was to appeal to crossover voters and independents wary of Trump.

In a moment designed to appeal to both gun control advocates and more conservative voters, Clinton forcefully said: "I'm not here to take away your guns."

"I just don't want you to be shot by someone who shouldn't have a gun in the first place."

But she spent considerable energy berating her November election rival, saying no Americans should trust a candidate who pledges that "I alone can fix it," as Trump said last week in Cleveland.

"Enough with the bigotry and bombast. Donald Trump's not offering real change," she said. as she suggested that the unprecedented ascent of her rival might be a unique moment in US history.

"Here's the sad truth. There is no other Donald Trump. This is it."