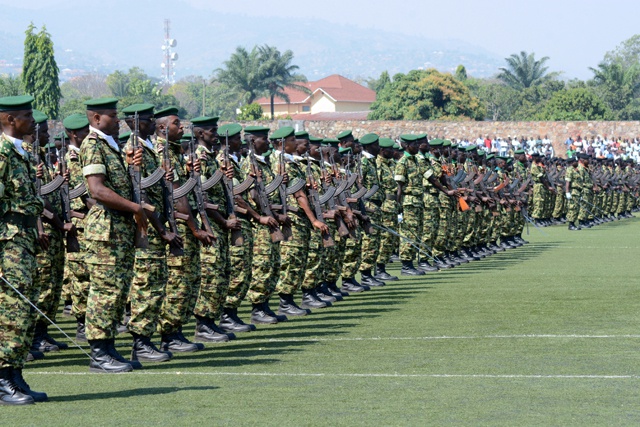 This file photo taken on July 01, 2016 shows soldiers standing at attention during a ceremony to celebrate Independence Day in Bujumbura on July 1, 2016. The UN Security Council on July 29, 2016, agreed to deploy a UN police force to Burundi to monitor human rights and help quell violence in the African country. (ONESPHORE NIBIGIRA / AFP)

(AFP) - The UN Security Council on Friday agreed to deploy a UN police force to Burundi, its strongest move to date to try to end more than a year of violence in the African country.

The council adopted a resolution drafted by France on dispatching up to 228 UN police to the capital Bujumbura and throughout Burundi for an initial period of a year.

Burundi has said it would not accept more than 50 UN police, drawing a question mark over whether the proposed force will have the strength in numbers to make a difference on the ground.

Four countries on the 15-member council abstained from the vote, which passed with 11 votes in favor.

The abstentions came from China, Egypt, Angola and Venezuela, which cited the need to secure Bujumbura's consent for the police force.

The Security Council is under pressure to take action in Burundi, where the descent into violence has raised fears of mass atrocities, similar to those that convulsed neighboring Rwanda in 1994.

"This is a strong act of preventative diplomacy," French Ambassador Francois Delattre said.

The new UN police force gives the council "eyes and ears" on the ground to provide early warning of possible mass atrocities, he said.

Burundi has been in turmoil since President Pierre Nkurunziza announced plans in April last year to run for a third term, which he went on to win.

More than 500 people have died, many of them in extrajudicial killings blamed on Burundian police, security forces and militias linked to the ruling party, according to the United Nations.

The UN police force would be tasked with monitoring security and human rights in coordination with African Union rights observers and military experts.

Burundi has agreed to allow 100 AU rights observers and 100 AU military experts into the country to monitor the crisis, but fewer than 50 have begun work on the ground.

The resolution urges the government to speed up the deployment of the AU monitors and to enter into dialogue with all opposition groups including "those outside the country" to end the crisis.

Political talks scheduled to open this month in Tanzania collapsed when the government refused to sit down with some opponents in exile accused of plotting a failed coup attempt in May last year.

The government's refusal to hold serious negotiations is seen as a key stumbling block in diplomatic efforts to end the violence.

The council threatened "targeted measures against all actors, inside and outside Burundi, who threaten peace and security" in the country.

The resolution said deploying the police force "would help create an environment conducive to political dialogue by averting further deterioration of the security situation as well as human rights and abuses."

Council members expressed deep concern for the ongoing violence in Burundi and pointed to a report by the UN human rights office that documented 348 extrajudicial executions and 651 cases of torture committed mostly by Burundian forces between April 2015 and April this year.

The council said the new police force's mandate and size could be reviewed if the security situation on the ground worsens.