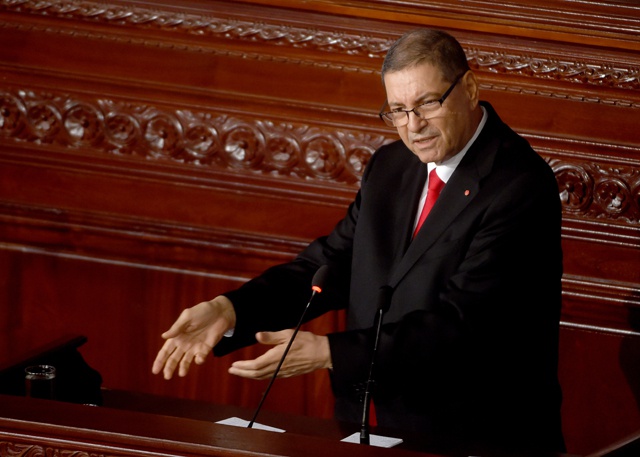 Lawmakers voted overwhelmingly in favour of dismissing Essid, whose government has been criticised for failing to tackle the country's economic crisis, high unemployment and a series of jihadist attacks since coming to power 18 months ago.

Out of Tunisia's 217 MPs, 191 were present for the vote. A total of 118 voted to unseat Essid, three voted for him to stay at the helm of the North African nation and 27 abstained.

The 67-year-old premier had been under growing pressure since President Beji Caid Essebsi appeared on local television in June to criticise the administration and propose creating a new government of national unity.

Essebsi is now required to launch consultations within 10 days to choose the "most suitable person" to form a new government, though no clear frontrunner has emerged so far.

The no-confidence outcome was widely expected after the four parties that make up Essid's coalition said they would vote to oust him.

Speaking before the vote, MPs praised Essid for his "integrity" but also criticised his record.

Former prime minister Ali Lareyedh, of the Islamist Ennahda party, said the government had been "too weak".

Essid had already been forced into a broad reshuffle in January, when the country witnessed some of its worst social unrest since the 2011 uprising that toppled longtime dictator Zine El Abidine Ben Ali.

His backers have condemned "pressure" from supporters of Hafedh Caid Essebsi, the president's son who is among the leaders of the Nidaa Tounes party.

Essid defended his record on Saturday, accusing his detractors of "pretending to forget" progress his government had made in fighting terrorism.

"This government was built to last... because the situation in our country required continuity," he said ahead of the vote.

He was applauded a number of times during his speech.

Several lawmakers from the left-wing opposition Popular Front party announced that they would not take part in the no-confidence vote, dismissing the procedure as "purely perfunctory".

Essid's ouster comes at a sensitive time for the nation, and Tunisian media doubted that it would solve the country's problems.

"Will the departure of Habib Essid and his team resolve the enormous difficulties facing the country? It would be naive to think that the rescue of the country depends on a government of national unity," wrote Le Quotidien.

Tunisia, whose 2011 uprising inspired similar revolts across other Arab countries, has been touted as a regional example of a successful transition to democracy after a revolution.

But successive governments have struggled to tackle a jihadist insurgency and to revive the flagging economy.

The country has been in a state of emergency since November, when a suicide bombing, also claimed by IS, killed 12 presidential guards in Tunis.

Economic growth slowed to 0.8 percent last year from 2.3 percent in 2014, and unemployment nationwide stood at 15 percent at the end of last year.