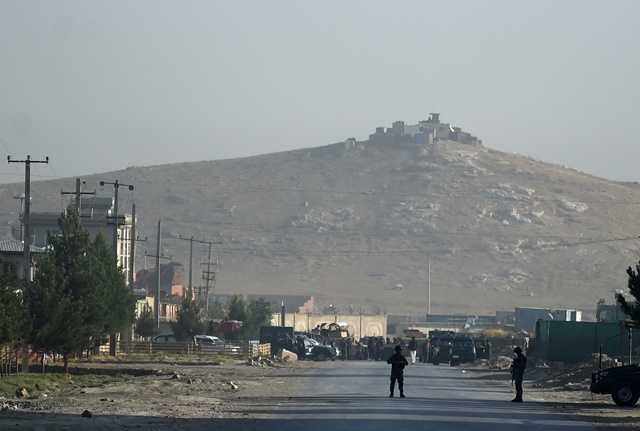 Afghan security forces stand guard near the site where a truck bomb exploded targeting a hotel used by foreign contractors, on the outskirts of Kabul on August 1, 2016. (WAKIL KOHSAR / AFP)

(AFP) - A powerful Taliban truck bomb struck a hotel for foreigners in Kabul Monday, triggering a seven-hour gun-and-bomb assault that highlighted the deteriorating security situation in a capital still reeling from its deadliest attack for 15 years.

The guests and staff of Northgate hotel were unharmed but one policeman was killed after the bombing, which rattled windows several kilometres (miles) away, paved the way for armed insurgents to enter the heavily guarded facility close to Kabul airport.

The compound housing foreign contractors was previously attacked in July 2013. Earlier this month, the Islamic State group claimed twin bombings that left 80 people dead in the Afghan capital, the deadliest attack in the city since the Taliban were ousted from power in 2001.

"One policeman lost his life and three others were wounded but none of the hotel staff or guests were hurt. Three Taliban fighters including the truck bomber were killed."

Afghan commandos set up a tight security cordon around Northgate as erratic grenade explosions and gunfire rocked the area after the attack began around 01.30am local time (2100 GMT Sunday).

Local TV station Tolo cited a source inside the facility as saying that all the staff and guests -- including 11 foreigners -- hunkered down in safe rooms all through the night.

It added that NATO special forces had overseen the clearance operation at the Northgate, a luxury enclave which had been fortified with blast walls, watchtowers and sniffer dogs.

Tremors from the massive truck bombing, which was preceded by a power outage, were felt across the city.

Taliban spokesman Zabihullah Mujahid said insurgents armed with rocket-propelled grenades and other weapons blasted their way into the compound after the truck bomb went off.

He claimed that more than 100 "American invaders" were killed and wounded in the assault. The Taliban are routinely known to exaggerate the toll from their attacks.

The assault comes as the Taliban ramp up their annual summer offensive after a brief lull during the holy fasting month of Ramadan, which ended in early July.

A chillingly similar Taliban attack on the compound in July 2013 -- a truck bomb followed by a gun siege -- killed nine people, including four Nepalese.

The July 23 Islamic State group bombings tore through crowds of minority Shiite Hazara protesters as they gathered to demand that a major power line be routed through the central province of Bamiyan, one of the most deprived areas of Afghanistan.

The Islamic State group is less powerful than the Taliban but is making gradual inroads into Afghanistan.

Afghan forces backed by US airstrikes have since intensified an offensive against IS jihadists in their eastern stronghold of Nangarhar.

The latest attacks in Kabul are a grim indicator of growing insecurity in Afghanistan, which has resulted in large civilian casualties.

The UN last week said civilian casualties rose to a record high in the first half of 2016, with children in particular paying a heavy price as the conflict escalates.

Between January and June, 1,601 civilians were killed and 3,565 were wounded -- a four percent increase in casualties compared to the same period last year, the United Nations Assistance Mission in Afghanistan (UNAMA) said.