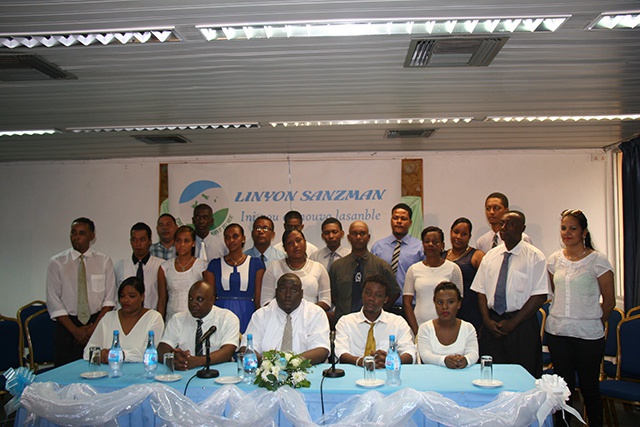 Group photo of 22 out of 25 candidates who will be standing under the banner of Linyon Sanzman in the upcoming parliamentary polls in Seychelles. (Rassin Vannier, Seychelles News Agency)

(Seychelles News Agency) - Linyon Sanzman or Union for Change on Sunday became the third political party in Seychelles to officially present its line-up for upcoming parliamentary elections set for September 8-10.

The opposition party announced candidates who will stand in all of the 25 electoral districts.

The leader of Linyon Sanzman, Martin Aglaé, said: "We would like to reiterate our commitment to work to take the country out of its present situation, for a better future."

The party is quite new on the Seychelles political scene. It registered in April.

Two other political parties have already presented their line-up. The ruling Parti Lepep was the first to present its 25 candidates, followed by an opposition coalition -- Linyon Demokratik Seselwa (LDS) or the ‘Seychellois Democratic Alliance.’

Other opposition parties have also expressed their intention to contest the September elections and should be presenting their contenders in the coming days.

The Electoral Commission has set August 17 as nomination day for the registration of candidates.

While the majority of Linyon Sanzman members presenting themselves as candidates will be contesting their first parliamentary election, Aglae is not new to Seychellois politics. He made his debut at the age of 20 in 2011 when he stood as a candidate for the Popular Democratic Movement (PDM) for La Digue island. He obtained 63 votes in the election.

He has since been involved in other opposition parties including the Seychelles National Party before deciding to register his own party saying his aim is to remove the ruling ‘Parti Lepep’ from power and unite the opposition parties.

In the upcoming legislative polls, Aglae will stand for English River -- a central district on the outskirts of the Seychelles capital, Victoria, where one of the Linyon Demokratik Seselwa leaders, Wavel Ramkalawan will also be standing.

On Sunday, Aglae again called on other opposition parties to unite to send a clear message to the ruling Parti Lepep.

“We are convinced that we will obtain a good result and we will have a strong assembly,” said Aglae.

This will be the second time in less than a year that eligible voters of the 115-island archipelago in the western Indian Ocean with a population of around 93,000 are being called to vote.

A presidential election which went through a historic run-off was held in December. The ruling party’s candidate James Michel was re-elected as President with 50.15 percent of the votes.

The opposition candidate Ramkalawan, representing the Seychelles National Party (SNP), received 49.85 percent of the votes. A difference of 193 votes separated the two candidates.