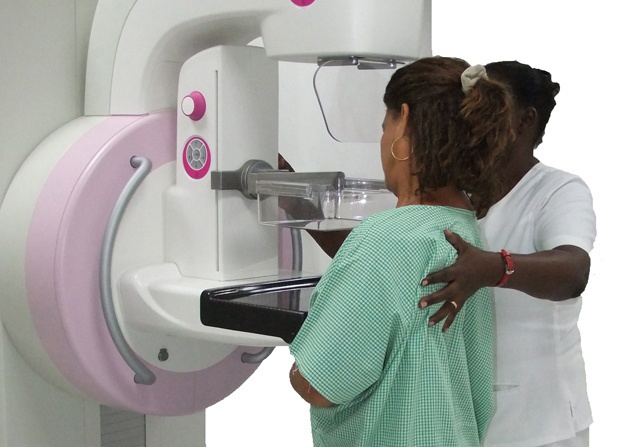 File photo: Patient undergoing a mammogram at the Seychelles Hospital (Seychelles News Agency) The goal of mammography is the early detection of breast cancer which is amongst the most common types of cancer worldwide including in Seychelles

(Seychelles News Agency) - Seychelles should enhance its cancer screening programme as soon as possible to allow for early detection, says an expert in the field.

“If you can diagnose this malignant disease in the early stage the overall survival of the patient increases and as a result the quality of life increases too,” Neuris said at the weekend.

Neuris -- a Cuban national -- is the first medical oncologist to be appointed by the country’s health ministry.

He presented his plans going forward during the mid-year meeting of Cancer Concern Association -- a non-governmental organization with the mission of providing support and counselling services to cancer sufferers and their families.

According to the Seychelles national cancer registry created in 2008, there has been a steady increase in new cancer cases recorded annually in the island nation of 93,000 inhabitants since 2009, when 140 new cases were diagnosed.

Neuris says the trend is similar to what is being observed worldwide and attributes this increase to people’s unhealthy lifestyle, which he said is also causing an increase in other chronic diseases like diabetes, hypertension and heart disease.

“For example people smoke and abuse alcohol. They do not exercise or eat a healthy diet. These are all risk factors that could lead to cancers,” he said, adding that a change in lifestyle could greatly reduce the number of cancer cases.

Neuris, who took up his new post in May, says his most pressing task is to increase all types of screenings at community level such as mammogram and pap smears, to be able to detect the disease at an early stage.

“Screening should be an active process and not a passive one. We should be targeting people at community level and especially those with high risk factors for example older persons and those whose relatives have died of cancer,” he said to SNA.

“As it is now, people are being diagnosed at a later stage with cancer and when this happens the possibility of cure decreases,” said Neudis, while adding that cancer patients in Seychelles have the possibility of being treated with the best chemotherapy and drugs in the world when detections are done early.

“We have been pushing for the appointment of a cancer specialist for a long time and we are happy that one has finally been appointed to care for our patients,” said Chang-Him.

The newly appointed medical oncologist who also gave a presentation on palliative care that is given to terminally ill cancer patients to improve their quality of life says the oncology unit at the Seychelles Hospital will work closely with the Cancer Concern Association.

The areas of interest to be addressed he says include “treatment of patients diagnosed with cancer, prevention and the promotion of a healthy lifestyle, early detection of different types of cancer as well as palliative care.”

“It is very important that people know that cancer is not synonym of death. You can prevent cancer, you can increase the overall survival of patients and the quality of life of the patients,” Neuris concluded.