Sunil Shah: Enchanted Island Resort, stepping back in time to the Old Seychelles 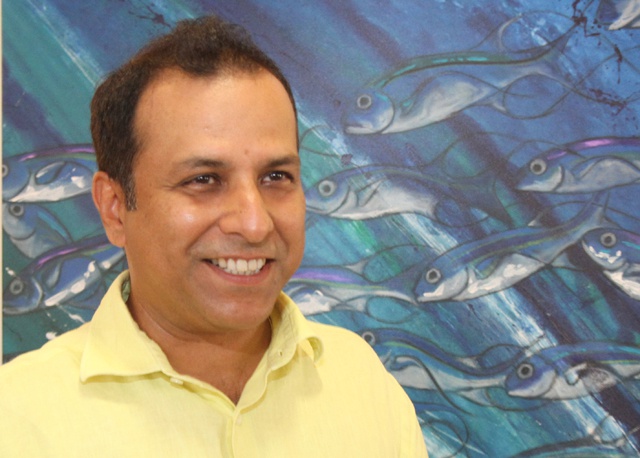 (Seychelles News Agency) - Enchanted Island Resort, a new luxury island hotel opened its doors to its first clients in December last year on Round Island in the Sainte Anne Marine National Park, a 10 minute boat ride from the main island of Mahe in the Seychelles archipelago.

Among its first celebrity guests was The Rolling Stones’ Ronnie Wood and his new wife Sally Humphries. Wood sketched artworks while on the island during his three week stay, and donated one of them to the 5 star luxury resort, which has only 10 villas, each with its own pool, and beach access.

The island resort is owned by a Seychellois family of Indian origin. Sunil Shah and his father Anant Jivan-Shah known as AJ, built the resort, which took 5 years and nearly $9 million worth investment by the family, which also has an accounting firm AJ Shah& Associates in Victoria, capital of the Seychelles.

Sunil’s grandfather Jivan Shah arrived in Seychelles in 1894, having travelled from Kutch, in northwest of India in Gujarat, coming to work in the trading business in the islands, which at the time were a British colony. Sunil’s uncle is the late Seychellois historian, Kantilal Jivan-Shah.

As they walked around the island, Sunil spoke to SNA’s Rassin Vannier and Sharon Uranie about the development of the resort concept, the personal selection of antiques for the project and the care made to protect the natural environment, ahead of the official launch of the resort, which is expected next month.

SNA: You are accountants who have entered the hotel business, what did you want to create by building this resort?

I basically created the Seychelles that my father remembers. So everything that you see here, belongs to that era, whether it’s the old furniture, we’ve got over a hundred and fifty pieces of old furniture, which were restored and which we’ve used throughout the resort.

You’ve seen some of my old posters on the walls, some of these posters date back to the early 20th century, 1905, 1920, and again they carry a whole theme, you know, of the old steam ships, the maritime lines that used to serve Seychelles, like British India [British India Steam Navigation Company] like Messageries Maritimes, all these old lines. That is the theme throughout the resort.

SNA: You personally chose the antique furniture, which was restored in India. Why did you get so involved?

Sunil Shah: My father used say to me... "to you it’s not a commercial project, it is a passion” and you can see the way it has been made, it was almost as if I was building my own home. And I wanted guests to feel when they come in here that they’ve come into a Seychellois home whether in terms of the décor or in terms of the ambiance.

…. It has taken us a lot of time but then again you know there are some things, that I keep telling people, are best cook on a slow fire. You can’t do a microwave job on a project like this you know. So it has to cook slowly and that’s what has happened and you can see the product for yourself now.

All these antiques, the genuine antique posters are a hobby of mine for the last almost eight, nine, years I’ve been collecting antique posters. So I buy them in auctions in France and in Spain.

I’ve got agents and I buy through them and then I found that you know quite few of these could grace this resort, so I’ve used a dozens of my old posters in all the public areas… which actually is part of the theme of the resort. So it was almost a hobby that fitted in well with what I was doing in terms of this project.

SNA: You want people share in the passion that you have?

So I want them to actually come here and feel Seychelles and like I keep saying, not for the modern Seychelles, not the Seychelles of today, but the old Seychelles of the 1930s, the 1940s, the era of steamed ships travel, the laid back lifestyle, the relaxed atmosphere, stuff that we’ve now lost, so we’ve recreated that on an enchanted island, you know on our little Round Island.

SNA: So it’s a family business?

Sunil Shah: It is a family business, this is a completely father and son project. It’s 100% Seychellois owned. It’s my father and I who conceived the whole thing, developed the whole thing and we are the owners of this property. It’s being managed by one of the finest groups JA Resorts from Dubai because we were very clear that when we started, we told ourselves…look, we know we will create a good property but we are not hoteliers, we are finance people, we are the leading professional accounting firm in this country and we were very clear that it’s one thing to build a property, and quite another thing to manage it, so we said we’re not getting involve in management.

We realised we had to be careful as to who is going to manage this property, because they should share our thoughts, the same ideas, the same culture, and the same feelings which we’ve created through this resort. We were very lucky, we found this group from Dubai, one of the oldest and leading operators in the UAE, JA resorts and hotels, and we entered into a management agreement and now they are managing the property for us. And what they bring to the table is their professionalism and their marketing skills.

SNA: How was the island when you started the project?

Sunil Shah: This island was just an uninhabited island. It had one restaurant which was quite popular among the people, it was called; “Chez Gabby’, but that was it, it was just a shed and when we came here, we said whatever we do here, it has to be something that we do sensitively, because the island itself is so beautiful. I remember the architect said, “I’ve told Mr. Shah that no architect in the world can outshine the beauty of this island, so all that I’m going to do is I’m going to provide, his guests with shelter by night.”

So he was not going to make any grand architectural statement! He has designed it in a very subtle way, in a very elegant way. He’s dropped in the Creole touch, but it’s not something grand, it’s very low key, very earthly, you feel connected, you feel like you’re at home.

SNA: The architecture reflects the style of old Seychellois Creole houses, who was the architect?

Sunil Shah: It was designed by a briliant Indian architect called Tony Joseph. He’s done some fabulous hotels in India. Really, he’s rated in the top qualified architects in India. He spent about six months just studying Seychellois architecture, “nou bann vye lakaz”[our old houses], you know we used to drive around to look at the old homes, look at the pictures, the derelict homes, homes that were abandoned and all those elements.

He said, Sunil I want you to do a total station topographical survey. That is, where every rock formation, every mature tree, is marked by the surveyor on an AutoCAD programme. So once that is done and the CD is sent to the architect, he sees the whole island in front of him on the TV screen, including all the plants, the trees, the rock formation, any significant structures that you have to build around. So once that was done, he can flip it around, do anything…

Once he did his initial layout, he said now I want to make this on site and I’m coming there, I’m coming to Seychelles and we will see. And then when we did that, we found that a few trees were not marked but they were there. So he said, “I’m sorry, I’m not cutting this tree”, so he created this cut in the building just so that this Callice tree could be saved.

We’ve planted some 20,000 plants. But the jungle, we’ve left it wild as it is. We’ve integrated our landscape into the jungle. Here the architect has allowed the forest to come in as if you’re integrated into the forest…Local fruits are grown on the island such as breadfruit, star fruit, pineapple and pomegranate, and the villas are named after plants in the Creole langue, ‘Bamboo’ ‘Ibiskis’, ‘Bodamier’.

SNA: Who are your main clients?

Sunil Shah: We opened on the 26th of December and we’ve really been having clients from all around the world. We had some celebrity guests ..… we’ve had a lot of high-net-worth guests, various nationalities from the Middle East, from Europe, from Russia, to me it’s really a great response.

Editor’s note: Sharon Uranie and Rassin Vannier visited the island during an afternoon and did not stay overnight. They received a complimentary non-alcoholic drink and banana snacks during their stay.

SNA presents a selection of photographs, courtesy of the resort.

New boutique resort in Seychelles to be called 'Enchanted Waterfront'