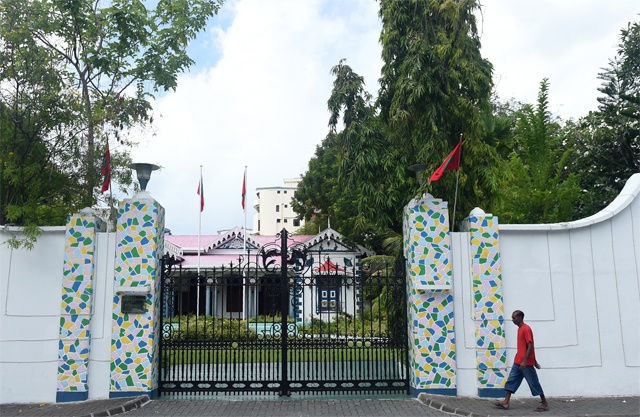 A Maldivian man walks past the Official Residence of the Maldives President in Male, the capital of the Maldives, on July 31, 2016. (
ISHARA S.KODIKARA / AFP

(AFP) - The Maldives brushed off warnings from Western governments Monday that a new defamation bill risked undermining basic freedoms on the troubled honeymoon islands, accusing its critics of hypocrisy.

After a joint statement from Western missions urging President Abdulla Yameen's administration to "return to the path of democracy", the government countered that the same countries had their own legislation which limited freedom of expression.

"The Joint Statement seeks to advance a notion of freedom of expression that is in fact restricted in four out of the five countries which are signatories to the statement," the foreign ministry said in a statement.

The reaction came after the United States led calls on Yameen to withdraw the bill, saying it gave authorities the power to impose severe penalties on people seeking to exercise basic human rights.

"The defamation bill that has been introduced in the Maldivian parliament risks being, if passed, a serious setback for freedom of speech in the Maldives," said the statement issued by the US embassy.

"It will allow severe penalties to be imposed on those who wish to exercise their democratic rights and freedoms, as enshrined in the Universal Declaration of Human Rights and the International Covenant on Civil and Political Rights."

The missive was supported by the Sri Lanka-based diplomatic missions of Britain, Germany, Norway, the Netherlands and the European Union, which have responsibility for the Maldives. Australia too issued a similar statement.

The Maldivian statement said the bill, if approved, would be referred to an all-party panel for further review before becoming law.

"The government, as it has consistently reiterated, welcomes the opportunity to engage with its international partners," it said.

"However, it does expect those partners to be constructive and responsible in their actions."

Maldivian police arrested 16 journalists in April for protesting against the bill, which seeks to criminalise defamation and proposes heavy fines and jail terms for offenders.

Independent media institutions fear it could be used to stifle freedom of speech on the islands, whose pristine seas and white sandy beaches are a popular draw for wealthy Western tourists.

But it has been gripped by turmoil since its first democratically-elected leader Mohamed Nasheed was toppled in 2012.

Nasheed, whose jailing last year on terror charges has been widely criticised by the West, has since secured political asylum in Britain after travelling there for medical treatment while on prison leave.