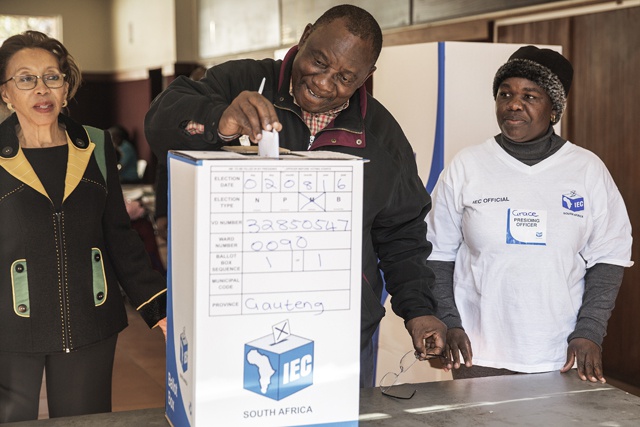 (AFP) - South Africans vote Wednesday in closely contested municipal elections that could deal a heavy blow to the African National Congress (ANC) that has ruled since leading the struggle to end apartheid.

Nelson Mandela's former party risks losing control of key cities including the capital Pretoria, the economic hub Johannesburg and coastal Port Elizabeth, according to some polls.

Development in South Africa has been patchy since Mandela won the first multi-racial elections in 1994, with many black communities still struggling with poor housing, inadequate education and a lack of opportunities.

"The Democratic Alliance is on the cusp of achieving something incredible and historic," Mmusi Maimane, the DA's first black leader, said on the eve of voting.

"The ANC has drifted from our original democratic project. They are venal, corrupt and flashy."

President Jacob Zuma retains widespread support, especially in rural areas, and the ANC's patronage network and deep coffers could help it maintain a hold in the majority of the 278 municipalities.

But Zuma has been weakened by a series of corruption scandals, court cases and dire economic data -- including an unemployment rate of 27 percent and a forecast of zero percent GDP growth this year.

"The ANC has failed dismally. After 1994, it promised heaven on earth -- we are still waiting," Mlungiseleli Kwanini, 60, an unemployed casual labourer in Port Elizabeth, told AFP.

"There are no jobs, there is a lot of crime and corruption, and no service delivery (of electricity and water)."

Kwanini said he was still hadn't decided which way he would vote, but added he was reluctant to vote DA due to the party's reputation as the home of middle-class whites.

"They can campaign saying nice things, but whites treated us badly during apartheid."

- Fight for the cities -

The latest polls by Ipsos showed the DA ahead in Nelson Mandela Bay (Port Elizabeth) and in a close fight in Tshwane (Pretoria) and Johannesburg.

The results, most of which are expected on Thursday, may pile pressure on Zuma to step down before his second term ends in 2019 when the national elections are due.

"I am confident that we are going to do very well," Zuma said at the end of a bitter and racial-tinged campaign in which he accused DA supporters of believing that black people could not lead the country.

Adding to the uncertainty is the revolutionary socialist EFF party, which has not stood in municipal elections before and has drawn large crowds to its rallies.

"The ANC is an organisation in crisis," said its firebrand leader Julius Malema on Tuesday. "They have run out of ideas, we are killing them."

The ANC expelled Malema in 2012 for poor discipline.

The EFF, which won six percent of the vote in the 2014 general election, advocates land redistribution without compensation and the nationalisation of mines.

"If ANC lose some big metros it will be a dire situation for President Zuma," Judith February, researcher with the Institute of Security Studies, told AFP.

"It would be hugely symbolic to lose Nelson Mandela Bay or Johannesburg -- cities of black workers. But we should never underestimate the ANC."

February added that close results could open a period of "tricky and messy" coalition building.

Polls open at 0500 GMT as voters choose mayors and other local representatives responsible for hot-button issues including water, sanitation and power supplies.

A record 26.3 million people are registered to vote, but low turnout may be a factor more than two decades after the euphoric 1994 elections that brought Nelson Mandela to power.