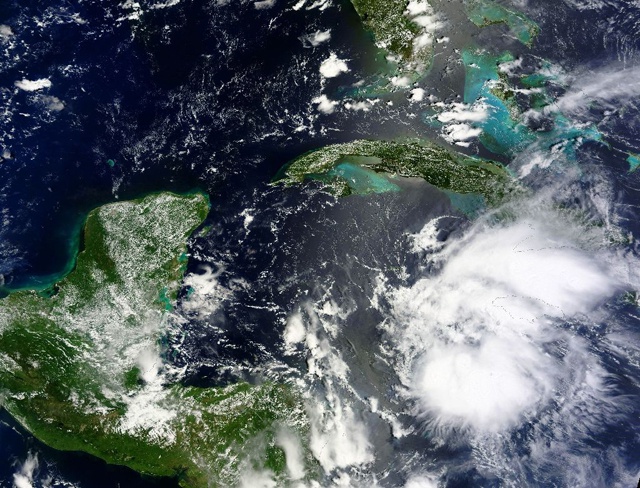 Tropical Storm Earl, seen from a satellite over the Caribbean, on August 2, 2016 (AFP Photo/NASA)

(AFP) - A hurricane sweeping in from the Caribbean on Wednesday was threatening Belize with mudslides, flooding and damage to homes, officials warned.

"These rains could cause flash floods and mud slides especially over higher terrain," Belize's National Emergency Management Organization said in a bulletin.

"For coastal areas, there is also a risk for flooding, especially in low-lying areas."

The outlying rim of the storm was dumping rain on northern Guatemala and on Honduras' Bay Islands in the Caribbean but no damage or emergencies were reported.

Earl was expected to weaken as it drove west, farther inland.

The fifth named tropical storm of the 2016 season, Earl strengthened to a Category 1 hurricane on Wednesday, according to the US National Hurricane Center (NHC).

Category 1, the lowest of five grades on the hurricane scale, is described as having dangerous winds of between 119 and 153 kilometers per hour that can rip off roofs, bring down trees and cause extensive damage to power lines.

The NHC said a weather-spotting plane had sidled up to Earl and measured sustained winds of 120 kilometers per hour that could strengthen further before hitting Belize.

Initially, the eye of the hurricane was projected to pass south of Belize City, but now it was seen to be on a path north of the city, population 60,000.

Belizean public and private workers were permitted to go to their homes Wednesday to secure property.

Officials warned that people living on the ground floor "will experience flooding" and some older wooden buildings would likely be destroyed.

The hurricane was forecast to continue westwards into largely rural northern Guatemala and then, as a weaker storm, into Mexico's southern states of Campeche, Quintana Roo, Tabasco and Yucatan.

Guatemala in particular is prone to rainy season flooding and mudslides that often prove fatal.

"This is the last boat that will go (to surrounding communities) until further notice," said Rafael Hicho, 46, who captains a local commuter boat.