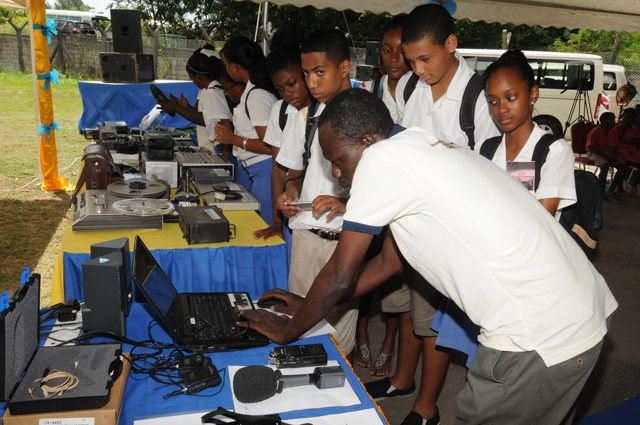 File Photo: SBC technician showing various radio equipment to a group of students during an exhibition in July 2015 marking the corporation's 50 years of radio broadcasting. SBC is among the beneficiaries of a $15 million grant Seychelles is getting from the Chinese government. (Louis Toussaint, Seychelles News Agency)

(Seychelles News Agency) - Seychelles will benefit from a grant from the Chinese government for infrastructure development projects, the island nation's authorities have said.

The Seychelles Broadcasting Corporation (SBC) -- one of the main beneficiaries -- is getting financial assistance to build a new broadcast house and purchase new equipment under the new economic and technical cooperation agreement the country has signed with China.

In a press statement issued on Tuesday, the Seychelles' Ministry of Foreign Affairs said the agreement for a grant worth some $15 million was signed in Beijing last week. Seychelles' ambassador to China Vivianne Fock Tave and the Chinese Vice-Minister of Commerce Qian Keming signed the accord.

SBC's Chief Executive Antoine Onezime welcomed the announcement. “The SBC is very happy to have been considered as our present infrastructures are quite old and have not necessarily been designed for a modern broadcasting facility,” he told SNA.

Onezime added that the financial assistance will sort out many functional and logistical issues that the corporation is facing on a daily basis.

SBC, which is a public broadcasting service, includes a television station based at Hermitage in the central district of Mont Fleuri and two radio stations -- ‘Radyo Sesel” and ‘Paradise FM’ -- at Union Vale on the outskirt of the capital, Victoria.

Radio broadcasting at Union Vale dates back to 1965 and television broadcast at Hermitage to 1983.

Onezime says SBC has already come up with a concept for the broadcast house which will be built at Union Vale and following a discussion with a Chinese team it will be submitted for their consideration.

Under the agreement SBC will also purchase new and modern equipment needed for radio, television and their online site.

Aside of the new SBC building, the $15 million grant will also be used to finance other priority projects earmarked by the government, says the foreign affairs ministry.

The grant is part of the three-year action plan agreed by China and African countries at the Forum on China-Africa Cooperation in Johannesburg, South Africa in December last year.

During the Forum, China pledged $60 billion in aid to infrastructural and human capacity development of African countries over a period of three years.

Seychelles and China established diplomatic relations in June 1976 and since then China has financed numerous infrastructural projects including housing estates, schools and the Palais de Justice building which houses the National Assembly.