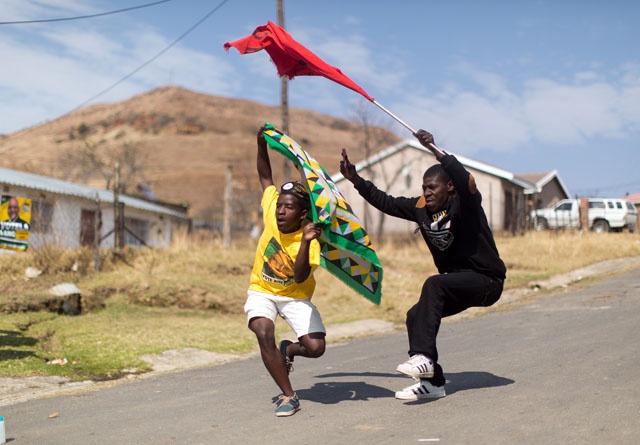 The opposition Democratic Alliance (DA) won Port Elizabeth, an industrial city on the south coast, by about six percentage points, bringing it victory in a key battleground of the municipal election.

With almost all votes counted in Port Elizabeth, the DA -- on 47 percent -- did not win an outright majority and will seek to build a coalition alliance with smaller parties.

In an ironic twist, the ANC, a party founded by Nelson Mandela, suffered its first major loss in a municipality known as Nelson Mandela Bay. Encompassing Port Elizabeth and the surrounding rural area, the area was a hotbed of anti-apartheid activism which won the name in 2001.

"We accept that we have lost (Port Elizabeth)," said Jackson Mthembu, ANC chief whip in parliament, ahead of final results for the other hotly-contested cities of Johannesburg, the economic hub, and Pretoria, the capital.

With about 90 percent of the nationwide vote counted, the ANC was ahead overall but it was the party's worst electoral performance since white-minority rule fell 22 years ago.

As the count drew to a close, Mandela's party was on 54 percent -- sharply down from 62 percent in the last municipal elections in 2011.

The ANC had previously won more than 60 percent of the vote at every election since the country's first multi-racial vote in 1994 when Mandela was sworn in as president.

- Battle for the cities -

The DA was on 26 percent with the radical leftist Economic Freedom Fighters (EFF) on eight percent, according to official results on Friday morning.

Final results were due out later in the day, with the ANC and DA neck-and-neck in both Johannesburg and Pretoria.

"The ANC is really losing ground," Shadrack Gutto, director the Centre for African Renaissance Studies at the University of South Africa, told AFP.

"The politics of the country are changing at the local level and that will escalate come the general election in 2019."

Wednesday's vote was also widely seen as a judgement on the performance of President Jacob Zuma, who has been plagued by a series of scandals since taking office in 2009.

An unemployment rate of 27 percent and GDP growth at zero percent this year have added to the country's woes.

Contesting its first local poll after bursting onto the scene in the 2014 general election, the far-left EFF could emerge in the influential role of kingmaker.

The party, which won six percent of the national vote in 2014, advocates land redistribution without compensation and the nationalisation of mines.