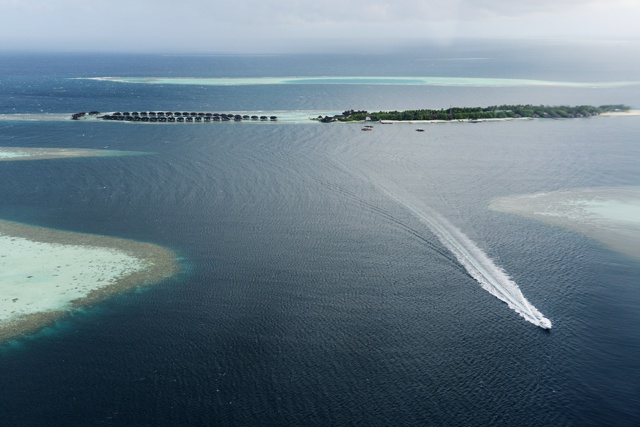 This photograph taken on September 9, 2013 shows an aerial view of one of the many luxurious resorts that dot the many islands that comprise the Maldives in the Indian Ocean. The International Union for Conservation of Nature has warned that coral reefs in the Maldives are under severe stress after suffering mass bleaching this year. (AFP PHOTO/ Roberto SCHMIDT)

(AFP) - Coral reefs in the Maldives are under severe stress after suffering mass bleaching this year as sea temperatures soared, a top conservationist body warned Monday.

Around 60 percent of Maldives' coral colonies have been bleached, with the figure reaching 90 percent in some areas, the International Union for Conservation of Nature (IUCN) said in a statement.

It cited data from a survey it carried out with the Maldives Marine Research Center (MRC) and the US Environmental Protection Agency (EPA).

"Preliminary findings of the extent of the bleaching are alarming, with initial coral mortality already observed," said Ameer Abdulla, the research team leader and senior advisor to IUCN on marine biodiversity and conservation science.

"We are expecting this mortality to increase if bleached corals are unable to recover."

Bleaching occurs when abnormal conditions, such as warmer sea temperatures, cause corals to expel tiny photosynthetic algae and thus become drained of colour.

Bleached corals risk dying if conditions do not return to normal.

Land and ocean surface temperatures rose to record highs in 2015 and at the beginning of this year, according to scientists.

The surge has coincided with an exceptionally strong El Nino -- a cyclical phenomenon that disrupts weather around the Pacific and is driven by sea temperature.

Warmer seas are a main culprit for the decline of coral reefs -- considered among the most diverse and delicate ecosystems on the planet.

Coral reef and bleaching experts from 11 countries and international institutions and universities helped conduct the survey at the height of the 2016 El Nino event, the statement said.

The Maldives, a nation of 1,192 tiny coral islands, contain around three percent of global coral reefs.

It is one of the most vulnerable countries to the impact of climate change since its average land height is only 1.5 metres (4.9 feet) above sea level.

The Maldives is not the only place where coral reefs are threatened.

Reefs worldwide have been facing widespread bleaching since mid-2014, according to the US National Oceanographic and Atmospheric Administration (NOAA).

In a bid to rein in the problem at home, the Maldives government has created a national task force and a monitoring programme, in cooperation with the EPA and IUCN.

The programme aims to help marine biologists, divers and others to contribute data that could help understand the national effects of the global bleaching event.

Activities such as dredging, sand replenishment, and fishing or purchasing of herbivorous fish like parrotfish and surgeonfish, which are essential for reef recovery, are also discouraged, according to the programme.