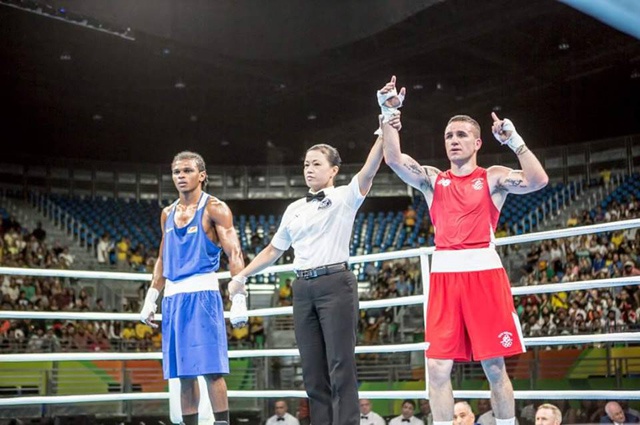 (Seychelles News Agency) - Seychellois boxer Andrique Allisop says he is proud of his performance despite being eliminated after losing his first fight in the Olympic Games in Brazil.

Allisop lost on a unanimous 3-0 decision against Irish David Oliver Joyce in the lightweight category (60kgs) in the preliminary round.

“I am not disappointed. I am proud of my fight because I performed twice better than my last time (Olympics 2012) and I was able to go three round of three minutes even with an injury. I did not give up,” said Allisop.

Allisop told SNA that he was hindered by a cut over his left eye after colliding with his opponent’s elbow.

“I had to be more careful and keep my distance but I was still bleeding and it affected my eyesight a bit. I did not have somebody on hand in my corner that could heal the wound quickly.”

In spite of Allisop’s injury, the scores were very close and he felt that he fought better than his opponent.

“I hit him more times and my injury did not stop me. I came here on a mission to give my best and I gave my best,” Allisop added.

An article on the Irish Breaking News website quoted Joyce as saying, “I’m delighted with the way it went. I knew getting in there he was a tough guy. We knew there’d be ups and downs.”

The 23-year-old Allisop, who won the best sportsman of the year title in 2012 and 2014 in Seychelles, a group of 115 islands in the western Indian Ocean, was up against Ireland’s multiple national lightweight champion.

Joyce has also won medals at international competitions: bronze in the Junior European boxing championship in 2003 and gold in the European Union tournament in 2009.

This is the second time the Seychellois boxer is being sent out of the Olympic Games in the preliminaries. In 2012 in London, Allisop also lost his first fight.

Joyce moves to the round of 16 and will face the world silver medallist from Azerbaijan, Albert Selimov.