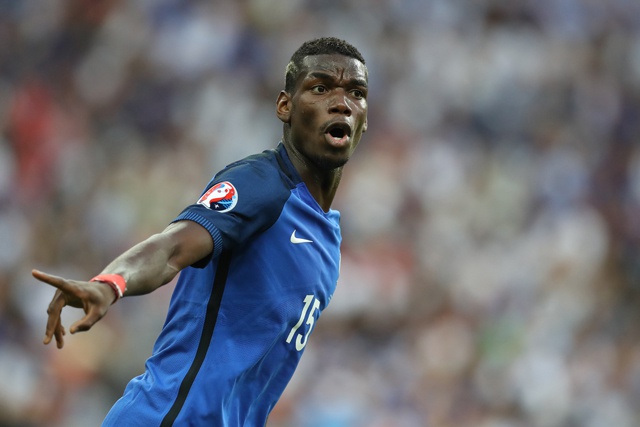 (AFP) - The world record for a transfer fee was shredded Tuesday when French superstar Paul Pogba completed a sensational return to Manchester United from Juventus for 105 million euros ($116 million).

After a weeks-long wrangle, United announced Pogba had signed a five-year contract, marking his return to a club that had let him go for a token fee in 2012.

In Turin, Juventus confirmed media reports that Pogba had been transferred for 105 million euros, which will be paid over two years.

The fee may rise by five million euros "on achieving given conditions," it said without further details.

The sum, equivalent to 89 million pounds, smashes the 85 million pounds for the transfer of Gareth Bale to Real Madrid from Tottenham Hotspur in 2013, "thus making Pogba the most valuable player in the sport’s history", Juventus said.

"This is the right club for me to achieve everything I hope to in the game," said Pogba.

"I am delighted to rejoin United. It has always been a club with a special place in my heart and I am really looking forward to working with Jose Mourinho."

The newly-appointed Portuguese has been tasked with bringing back the glory days to the 20-time English champions after three lean years since Alex Ferguson's retirement.

"He has the chance to be at the heart of this club for the next decade and beyond,” said Mourinho.

"Paul is one of the best players in the world and will be a key part of the United team I want to build here for the future. He is quick, strong, scores goals and reads the game better than many players much older than he is."

Pogba made just seven appearances during his previous spell at the club as a teenager before leaving for Juventus when his contract ran out.

He now returns as one of the world's most famous players after winning four consecutive Serie A titles and leading France to the Euro 2016 final.

"Thanks @juventusfc and all Juventini. Goodbye means nothing, it is the time we spent together that matters," Pogba posted on his official Twitter account.

It is the first time since now Real Madrid coach Zinedine Zidane joined the Spanish giants as a player in 2000 from Juventus that Madrid haven't got their hands on the world's most expensive player having also bagged Cristiano Ronaldo from United in 2009 for a record fee.

United brought the long-running transfer saga to an end in the early hours of the morning UK time.

The reported fee does not include agent's fees. The transfer had stalled for weeks over how the two clubs would share the sizeable payout to Pogba's representative Mino Raiola.

And the huge cash outlay will lead to questions over how Ferguson -- one of the greatest managers of talent in football -- allowed Pogba to slip out of United's hands four years ago over differences with Raiola.

In his 2015 book 'Leading', Ferguson described his first meeting with Raiola as "a fiasco".

"He and I were like oil and water," Ferguson wrote.

"From then on, our goose was cooked because Raiola had been able to ingratiate himself with Paul and his family and the player signed with Juventus."

Mourinho insisted United's financial muscle should be a source of pride not embarrassment.

However, the Portuguese boss has hinted Pogba's arrival will signal the end of United's spending spree.

"Our fundamental market is 75 percent done," he said during United's pre-season tour of China.

"When we sign one midfield player that crucial work will be done."

Mourinho's reign got off to a successful start on Sunday as Ibrahimovic scored the winner in a 2-1 victory over Premier League champions Leicester City in the Community Shield.