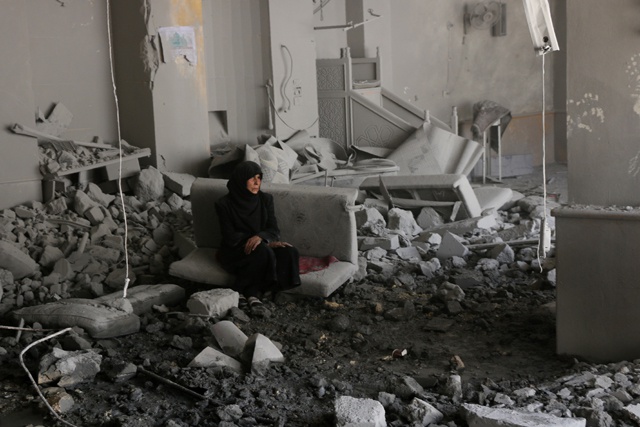 (AFP) - Russia's defence ministry on Wednesday said it would hold fire around Syria's ravaged city of Aleppo for three hours each day to allow humanitarian aid in, an initiative the UN said is insufficient to meet the city's needs.

"To guarantee total security for the convoys to Aleppo there will be humanitarian windows established from 1000 to 1300 local time starting tomorrow during which all military hostilities, aviation strikes and artillery strikes will be halted," Lieutenant General Sergei Rudskoy of the Russian army's general staff told journalists.

The pause would take place daily from Thursday from 0700 GMT to 1000 GMT, although Rudskoy did not specify how many days it would continue.

Shortly after Moscow's announcement, the United Nations' top aid official said that halting fire for three hours a day would not be enough to ensure that civilians' humanitarian needs are met.

"To meet that capacity of need, you need two lanes and you need to have about 48 hours to get sufficient trucks in," Stephen O'Brien, UN under-secretary general for humanitarian affairs, told reporters.

"When we are offered three hours, you have to ask what can be achieved in that three hours."

The United Nations has called for urgent aid access to Aleppo and 48-hour weekly pauses for the aid deliveries, warning that civilians are at grave risk from water shortages and disease as fighting has intensified.

Up to two million people in Aleppo have gone without running water for the past four days, UN agencies said.

O'Brien said he had not been fully briefed on the Russian proposal but that there were complicated logistics to address, such as ensuring that truck drivers have enough time to safely make the trip to the city and back.

On Wednesday the markets in opposition-held districts of Aleppo were the fullest they have been in weeks as food stalls and shops had been empty of customers after a government siege of the eastern districts led to rising prices and shortages.

Shoppers scurried through the vegetable markets, buying as quickly as possible in case a siege is reimposed or prices rise again, an AFP correspondent at the scene saw.

Fighting between government forces and rebels in Aleppo has intensified in the past month, with both sides sending in reinforcements for an all-out battle that could mark a turning point in the five-year war.

Rudskoy said that "more than 1,000 were killed and about 2,000 wounded" in the rebel ranks over the past four days southwest of Aleppo.

He added that a road had been built to an area on the northern outskirts of Aleppo through the Castello shopping centre to "ensure safety and organise round-the-clock delivery of food, water, fuel, medicine and other necessities to the city's west and east".

"We support the proposals by the UN to establish joint control over the delivery of humanitarian aid to the population of Aleppo along the Castello road," he said.

Doctors in opposition areas of the city warned that the situation remained dire, with a shortage of medical supplies forcing them to make impossible choices.

"Young children are sometimes brought into our emergency rooms so badly injured that we have to prioritise those with better chances, or simply don't have the equipment to help them," they wrote in a letter addressed to President Barack Obama, in which they lambasted the US for inaction.

The recent flare-up in fighting began in late June as government forces closed in on the Castello Road, the last route into rebel-held parts of the city.

Aleppo has been divided between a rebel-held east and regime-controlled west since fighting erupted in mid-2012.