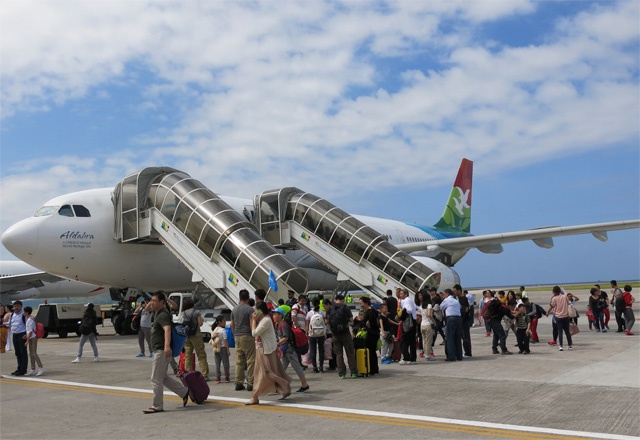 File Photo: Tourists landing in Seychelles at the international airport. Tourism is the mainstay of the Seychelles economy. (Patrick Valmont, Air Seychelles)

The Seychelles Finance, Trade and Blue Economy Minister, Jean Paul Adam, said on Friday that the rating and the archipelago’s ‘stable outlook’ affirmed by Fitch is also a show of “confidence in our economy.”

“Quite a number of countries including both highly developed countries and developing African countries have been downgraded due to global uncertainties, so for us this shows that we are on the right track,” said Adam.

The finance minister spoke during a press conference a day after the Finance Ministry announced the latest rating from Fitch.

“Fitch Ratings has affirmed Seychelles' Long-Term Foreign- and Local-Currency Issuer Default Ratings (IDRs) at 'BB-' with a Stable Outlook. The issue rating on Seychelles' unsecured foreign-currency bond has also been affirmed at 'BB-'. The Short-Term Foreign- and Local-Currency IDRs have been affirmed at 'B' and the Country Ceiling at 'BB',” read a ministry of finance statement on Thursday.

A default in debt payments prompted Seychelles to embark on a five-year IMF-backed economic reform programme in October 2008, ending in October 2013. This has been followed by a new generation of reforms approved by the IMF in June 2014.

The ratings by Fitch is done on a regular basis to assess the country’s economic outlook including its external debt situation and potential risks to the archipelago’s economy.

In its latest assessment, the ratings agency noted that the island nation’s public debt remains on a downward path, while highlighting the fact that the government’s target to reduce the debt to GDP ratio to below 50 percent by 2018 has now been moved to 2020.

The authorities have also decided to reduce the country’s primary surplus to 3 percent of GDP for the years 2017 to 2020 compared to above 4 percent the past two years.

Minister Adam explained that these are among offsetting measures being taken as the government aims to implement deeper structural reforms.

He spoke about the ongoing exercise to implement a progressive income tax reform which he says is aimed at providing more benefits to the population.

“This is aimed of course at reinforcing the capacity of Seychellois families to have a bit more disposable income and to have the capacity themselves to invest in the local economy,” said Adam.

The finance minister said that diversifying the economy, highlighting new initiatives like the blue economy concept and building the capacity of small and medium businesses are some of the ways to increase productivity and building resilience against any future external shocks.

“There are a few things to keep in mind including uncertainty when it comes to the value of the euro for example, we have seen that the Brexit has affected tourism from the United Kingdom and also when it comes to the country’s revenue which is largely in euro,” Adam said, adding that there is no reason to panic as the country has been able to such instabilities.

The authorities remain aware of the island nation’s vulnerability being a small country, which relies heavily on imports and also on tourism as the mainstay of the economy.

Commenting on Seychelles’ main tourism market, the Fitch ratings agency has already highlighted that it expects Eurozone growth to weaken slightly to 1.4 percent in 2017-2018 from 1.7 percent in 2016.

The Governor of the Central Bank of Seychelles Caroline Abel says that there is a need to continue to monitor the monetary policies that could affect future ratings.

Both Adam and Abel have reflected on the need for a coordinated approach between the finance ministry and central bank to ensure that reforms are implemented in a way that helps to maintain local and international confidence in the economy.

“The coordination is the key to ensure that all contemplated reforms are discussed and we must ensure that they do not bring any instability during implementation,” said Abel.