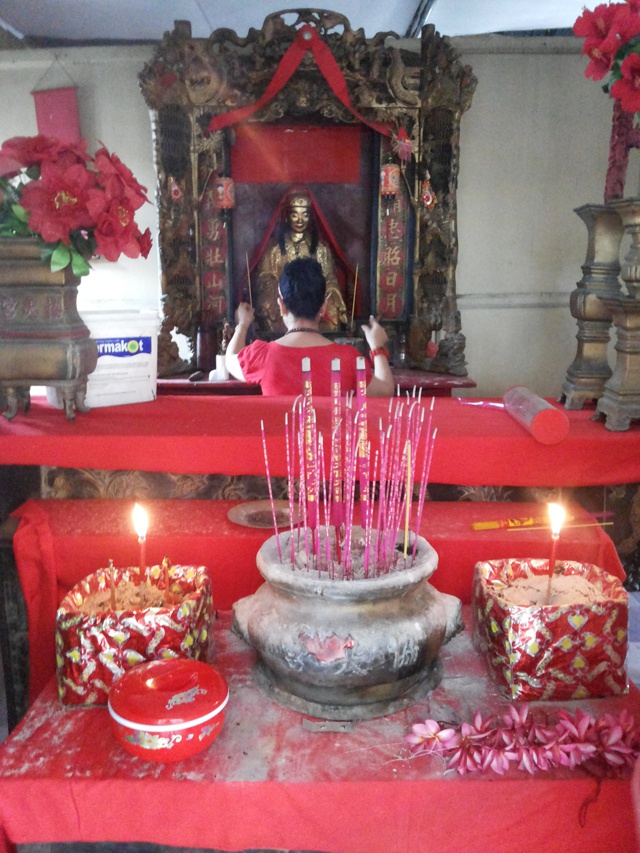 The Chinese Pagoda was originally built in 1902 as a place of worship (April Amesbury, Seychelles News Agency)

(Seychelles News Agency) - The Chinese community in Seychelles joined together today to see for the last time the old Pagoda near the Sir Selwyn Clark market in the capital of Victoria, before it is demolished to make way for a new one.

Originally built as a place of worship in 1902, those present at the old monument this morning surely had many memories to recount, as the shrines and statue of Kuan ti- the Chinese God of War were removed from the building and placed at the home of a member of the Seychelles’ Chinese association to pave way for the construction to start.

These will be returned once the new building is completed.

“I remember on Sunday nights my father would go down to the pagoda to play Mah-jong and he would come back home on his bicycle at one in the morning. I even got married at the Pagoda so it is really a place full of memories,” said Mrs Julie Fayon, a member of the community.

Many other members of the association shared their childhood recollections of the pagoda.

“I’ve spent countless New Year lunches and dinners at the pagoda. My mother along with other women from the Chinese community would gather at the kitchen behind the pagoda to cook big festive meals,” one was heard saying.

The laying of the foundation stone for the new Pagoda took place in February during the first Seychelles-China Day and now nearly four months later everything looks set for the 112 year-old building to be demolished.

The construction will begin in June and should be completed in 10 months’ time.

The renovated pagoda will feature a restaurant on the ground floor where people can have reunions and ceremonies, and the upstairs will be reserved for the shrines and as well as a gaming area.

The chairman of the Chinese Association of Seychelles Charlie Ng Ping Cheun says the new building will feature the Chinese architecture.

“We want the building to be representative of Chinese culture and be an attraction for tourists, this is why traditional Chinese architecture will be used” he told SNA.

The contractors have estimated the cost of the building at 9 million rupees, about $ 737 thousand.

“Although the embassy is contribution for the renovation of the pagoda, it is the Chinese association who is the main player,” said Zhongjun who hopes the pagoda will showcase the symbolic beauty of the Chinese community and culture.

The Seychelles National Archives have records of the first Chinese arrival in the Seychelles in 1863 aboard a merchant ship. They were followed by a group of 23 more immigrants from Mauritius in 1886. The pioneers built the pagoda early in 1900 whereupon it helped preserve Chinese traditions and sheltered new immigrants as it also became a classroom for Chinese culture lessons.

The Minister for Tourism and Culture, Alain St Ange, also present this morning as the Chinebid community bid farewell to their old Pagoda described the Chinese community as one of the 5 pillars of Seychellois society (African, French, English, Indian and of course Chinese).

“Over the years it has lost its place in society and it is now being re-established especially since Seychelles organised its first Seychelles-China Day Celebrations earlier this year in February also as a way of promoting the Chinese culture,” said St Ange adding that it was time to have something remarkable depicting the Chinese culture noting that the new pagoda will do just that.