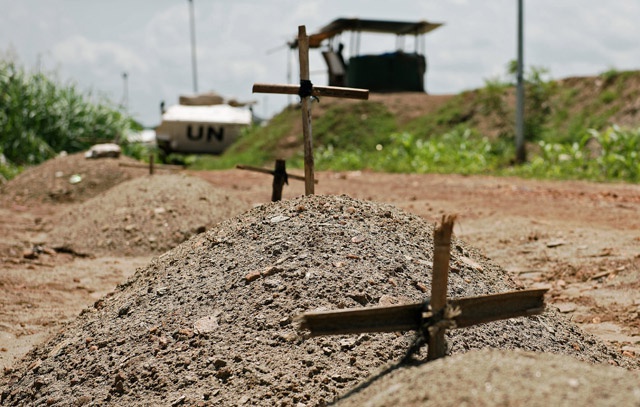 A picture taken on July 22, 2016 shows makeshift graves at the United Nations Mission in the Republic of South Sudan (UNMISS), the UN House for internally displaced persons in the Jebel area in Juba on July 22, 2016. (Charles Atiki Lomodong/AFP)

(AFP) - The UN Security Council on Friday authorized the deployment of a robust force of 4,000 troops to South Sudan after heavy fighting set back efforts to end the country's devastating war.

The council adopted a US-drafted resolution that also threatened to impose an arms embargo on South Sudan if the government blocks the deployment.

Eleven countries in the 15-member council voted in favor of the resolution. China, Russia, Egypt and Venezuela abstained from the vote, citing the failure to secure South Sudan's consent for the new mission.

African leaders called for the regional force to secure Juba and help protect UN bases there after a flare-up of violence in the capital that left hundreds dead in early July.

Ethiopia, Kenya and Rwanda are expected to contribute the bulk of the new troops who will be authorized to "use all necessary means, including undertaking robust action where necessary" to fulfill their mandate.

The force will ensure security in Juba and at the airport and "promptly and effectively engage any actor that is credibly found to be preparing attacks or engages in attacks".

Under the measure, the council will consider imposing an arms embargo on South Sudan if UN Secretary-General Ban Ki-moon reports that there are "impediments" to the deployment.

Ban will deliver a report to the council in 30 days and a vote on the arms embargo could take place in the following five days if he finds that the government in Juba is uncooperative.

South Sudan's devastating war has raged for two and half years, fueled by growing stockpiles of weapons.

Britain voiced disappointment that the arms embargo was not imposed immediately with Deputy Ambassador Peter Wilson telling the council: "We must and we will return to this issue."

The vote followed a week of tough negotiations, with China, Russia and Egypt voicing concerns over deploying UN peacekeepers without the government's full consent.

South Sudan's ambassador said his government rejected the resolution, telling the council that the details of the deployment -- including timing and the weapons the troops will be allowed to carry -- must first be negotiated with Juba.

"Consent of South Sudan... would have been important as it would have given the force all the necessary freedoms to carry out the outlined mandate tasks," said Akuei Bona Malwal.

A key ally of South Sudan's President Salva Kiir, Uganda said Friday it would not contribute troops to the regional force, even as the UN refugee agency reported that 82,000 South Sudanese had crossed the border into Uganda in the last five weeks.

"No one thinks that this regional force will be a cure-all to the instability and the violence that exists there," US Deputy Ambassador David Pressman told reporters.

But Pressman emphasized that African regional leaders had requested UN approval for a robust force to bolster security and open up space for diplomatic efforts.

Months of diplomatic efforts had led to Machar's return to Juba in April to join a national unity government as vice president.

The UN mission in South Sudan, known as UNMISS, has come under criticism for failing to protect civilians with its current 13,500 peacekeepers.

About 200,000 South Sudanese have been sheltering in UN bases across the country since the war began in December 2013.

Overall, more than 2.5 million people have been driven from their homes during war including 930,000 who have fled to neighboring countries, the UN's refugee agency said.

The resolution extended the mandate of UNMISS until December 15.