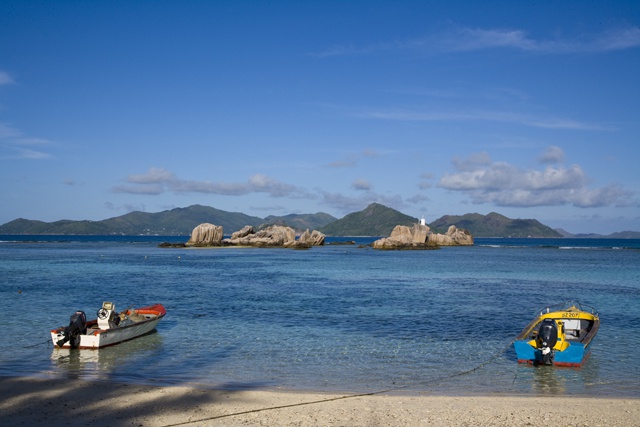 File Photo: Praslin island can be seen in the photo taken from the shore near the jetty on La Digue island. A boat with six persons onboard including the skipper capsized on Saturday evening while travelling from La Digue to Praslin. Three people have died and three survived the tragedy. (Gerard Larose, Seychelles Tourism Board)

The six people were onboard a boat that capsized and sank Saturday while travelling from La Digue to Praslin, the second-most populated island.

Police spokesperson Jean Toussaint, who spoke to SNA over the phone from La Digue, confirmed that the three survivors included the skipper, who swam for help. A 6-year-old boy and a man were rescued on Sunday, Toussaint said.

“Three people have died," Toussaint said. "The bodies of two women and an elderly man have been recovered." The man was 65.

The precise locations where the deceased and the survivors were found have not yet been confirmed.

The three survivors are receiving medical treatment. According to a joint press statement by the Marine Accident Investigation Board and the Seychelles Maritime Safety Administration the child and man were flown to the main island, Mahé, for further care.

The incident reported at around 7pm on Saturday occurred in an area known as Ros Kannal, around halfway between Praslin and La Digue, which lie some 15 minutes apart when travelling by fast ferry.

According to the joint press statement the first call for help came from the skipper of the vessel – a fishing boat registered as ‘Faith.’  The statement says he “was recovered from the sea after swimming to an anchored yacht off of La Digue.”

The Director General of the Seychelles Maritime Safety Administration Captain Joachim Valmont told SNA that the skipper explained to the authorities that “a woman had fallen from the boat and that after going back to rescue her the boat capsized and sank as everyone were seated on one side.”

In a press statement issued by State House on Sunday, the Seychelles President James Michel said he shares the suffering and sadness of the victims’ families.

“It’s a huge tragedy and the whole Seychellois nation is living the tragedy,” said Michel who had called for all necessary state resources to be deployed to aid search and rescue efforts.

The president said that the nation rejoices that a young boy and a man were found alive.

The accident occurred at a time of year when there is a lot of movement on La Digue, which commemorates the Feast of the Assumption of the Virgin Mary, the Patron Saint of the island on August 15.

A packed weekend of festivities kicked off on Friday ahead of the religious feast on Monday. Hundreds of people including visitors as well as locals from Mahe and Praslin have been converging on La Digue since Friday.

Following the tragedy the mood on La Digue have been dampened.

“It’s a somber atmosphere following the accident that occurred on Saturday night, very sad. It’s something I was not expecting to happen,” Peter Pillay, a resident of Mahe now on La Digue told SNA.

“The incident has been on my mind since this morning and now I am a bit relieved that the child involved has been rescued…it’s a great pain for the families,” Yacinthe Niole, a La Digue resident said to SNA.

The capsized vessel – a 16-feet fibre glass vessel -- has already been salvaged from the sea. The police, Marine Accident Investigation Board and the Seychelles Maritime Safety Administration have initiated an investigation into this incident.

The skipper is being detained by the police pending further investigation.