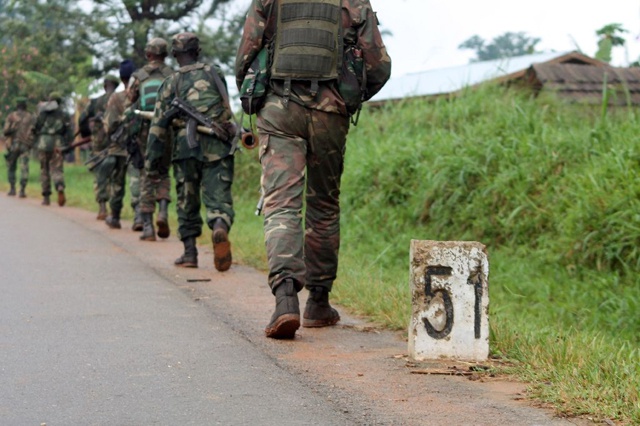 (AFP) - At least 42 civilians have been killed in the eastern Democratic Republic of Congo, a local official said Sunday, in what the government described as a massacre in revenge for military operations in the area.

Three days of national mourning have been declared following Saturday night's mass killing, the latest in a series of massacres that have left more than 600 people dead in and around the troubled town of Beni since 2014.

Speaking to a local radio station, Beni mayor Edmond Masumbuko said 42 people had been killed. The government had earlier put the death toll at 36.

The group has been present in DR Congo for more than two decades and is accused of copious human rights abuses.

Hazukay said the ADF rebels had "bypassed" army positions "to come and massacre the population in revenge" for military operations in the area.

The victims were found in Rwangoma, a neighbourhood on the outskirts of Beni, according to government spokesman Lambert Mende.

Mende said the government has previously sought to "alert the world to the jihadist threat" in DR Congo, adding: "In our country, the armed forces of the DRC are alone in the face of the indifference of the international community".

Around a hundred angry residents gathered in Beni to protest against the mass killing, carrying the body of one of the victims and shouting slogans against President Joseph Kabila, witnesses said.

"The police have just taken the body off us but we will continue to protest. It's not normal that they slaughter us like goats," said motorcycle taxi driver Georges Kamate.

"Our government is incapable of keeping us safe!" shouted another protester.

The killings came three days after Kabila visited the region, promising to do everything in his power to bring peace and security.

"It's worrying because the president of the republic came here and then we were massacred," said Gilbert Kambale, a local civil society leader.

"There is a blatant lack of security, (the authorities) are not capable of keeping the population safe. That is why these people have come into the street," he said.

"Flags will be lowered to half-mast across the country and media scheduling will be adjusted to the situation," he said.

Beni lies on the edge of the vast Virunga national park, used as a hideout for some of the dozens of militant groups active in North Kivu.

The area has been badly hit by violence over the past two years, suffering a series of massacres which the Congolese government and the UN's mission in DR Congo, MONUSCO, have blamed on the ADF.

But in March, that allegation was recently questioned in a report published by the Congo Research Group at New York University, which looked into the massacres around Beni, and claimed that soldiers from the regular army had also participated in the killings.

The government rejected the claims and said the ADF was "definitely" responsible for the massacres.

The ADF, opposed to Uganda's President Yoweri Museveni, is thought to be deeply embroiled in criminal networks funded by kidnappings, smuggling and logging.

Despite efforts by the international community and the Congolese authorities, the region has remained mired in violence since the end of the second Congolese war (1998-2003).

On August 8, 11 Congolese soldiers and a UN peacekeeper were wounded in the Beni area during a confrontation with ADF forces, MONUSCO said.