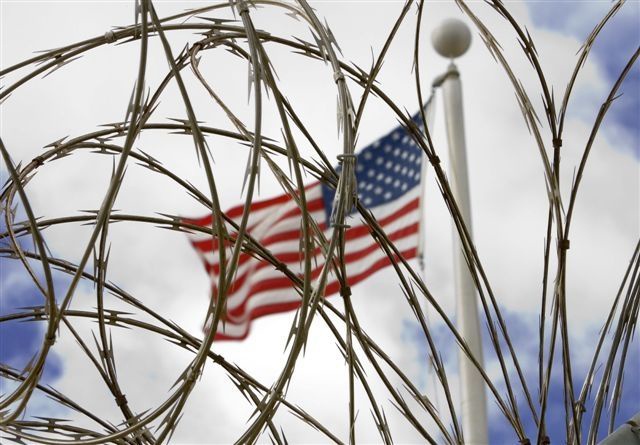 The US flag flies above the US Naval Base at Guantanamo Bay, Cuba (AFP Photo/Paul J. Richards)

(AFP) - Fifteen Guantanamo Bay detainees have been transferred to the United Arab Emirates, the largest such release in years, the Pentagon announced Monday.

The latest transfers bring the remaining population of the detention center down to 61. Since the September 11, 2001 attacks, about 780 inmates have been housed in the US military-run facility.

According to a State Department official, speaking on condition of anonymity, 12 of the men are from Yemen and three are Afghans.

The Pentagon has previously struggled to find a third country to take Yemeni detainees, given that they can't go home because of the civil war in their nation.

"The United States is grateful to the government of the United Arab Emirates for its humanitarian gesture and willingness to support ongoing US efforts to close" Guantanamo, the Pentagon said in a statement.

Amnesty International USA welcomed the announcement as a sign President Barack Obama is serious about closing the controversial facility before he leaves office.

"It's a significant repudiation of the idea that Guantanamo is going to be open for business for the indefinite future," Naureen Shah, Amnesty International USA's security and human rights program director, told AFP.

One of those transferred is an Afghan called Obaidullah, who allegedly had hidden land mines in 2001. He was detained for 14 years without trial.

Monday's announcement represents the largest transfer of prisoners under the Democratic Obama administration.

"The continued operation of the detention facility weakens our national security by draining resources, damaging our relationships with key allies and partners, and emboldening violent extremists," Ambassador Lee Wolosky, the special envoy for Guantanamo closure, said in a statement.

"The support of our friends and allies -– like the UAE -- is critical to our achieving this shared goal."

Obama urgently wants to close the facility before he leaves office at the start of next year but has been continually thwarted by Republican lawmakers.

Still, the United States has in recent months accelerated the rate at which detainees who have been approved for transfer are released from the facility.

When Obama took office, there were 242 detainees at Guantanamo.

Monday's announcement means 19 inmates will remain who have been cleared for transfer.

Obama wants to send the rest, deemed to be the most dangerous, for incarceration in the United States -- but that is an extreme long shot given Republican opposition.

In February, the president presented Congress with a new closure plan for Guantanamo, which he says serves only to stoke anti-US resentment and fuel jihadist recruitment.

November's election will likely help determine the future of the notorious prison, as Republican presidential candidate Donald Trump has vowed to fill Guantanamo with "bad dudes" should he win the White House.

Trump has said he would "bring back a hell of a lot worse than waterboarding."

To date, just 10 of the detainees face criminal trial, including the "9/11 Five" -- led by Khalid Sheikh Mohammed -- who are accused of plotting the September 11, 2001 attacks.

Shah said it was important for Obama to push ahead with plans to shutter Guantanamo, or the next administration could start filling its cells with suspected jihadists captured in the campaign against the Islamic State group in Iraq and Syria.

"We are at an extremely dangerous and pivotal point where if President Obama fails to close Guantanamo then the next administration could bring more detainees there," Shah said.

Guantanamo is a US naval base carved out of a remote chunk of land on the tip of southeastern Cuba.

The administration of George W. Bush opened a prison there to hold terror suspects.