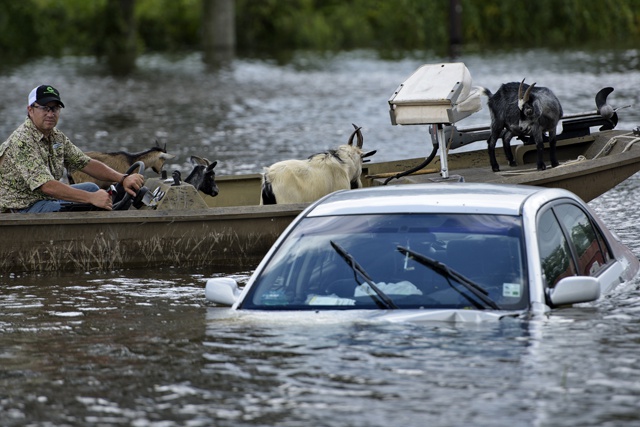 A man navigates a boat of rescued goats past a partially submerged car after flooding on August 16, 2016 in Gonzales, Louisiana. (Brendan Smialowski/AFP)

(AFP) - The death toll from historic flooding in Louisiana climbed to 11 on Tuesday as the expanding flood zone prompted authorities to declare disasters in 20 parishes of the southeastern US state.

Officials said 40,000 homes have been impacted by the floods and more than 8,000 people were in shelters.

More than 20,000 have been rescued or evacuated, they said.

Twenty parishes -- similar to counties in other states -- were declared emergency disaster areas, up from four on Monday and 12 earlier on Tuesday.

The designation frees up federal money to aid with rescue operations and emergency housing, among other things.

"We're just now moving into recovery phase. We're still rescuing in the southern part of the parish," said Layton Ricks, the president of Livingston Parish -- more than 75 percent of which was affected by flooding.

There were reports of looting in areas where homes and businesses were abandoned by fleeing residents.

Many municipalities implemented evening curfews to combat the problem, and to allow rescue crews to move freely at night.

"I felt this is the best way to protect our residents," said East Baton Rouge Sheriff Sid Gautreaux, adding that 10 people were arrested for looting since Monday afternoon.

Edwards said there were still some 34,000 households and businesses without electricity in torrid summer heat and humidity -- raising concerns of mold in waterlogged buildings.

"There are still a lot of people who are suffering," he said.

The Louisiana governor's office confirmed to AFP late Tuesday that 11 people had died in the flooding.

Rescue crews were searching for more victims, with officials uncertain about how many people remain missing.

"We are going door to door," said Baton Rouge Fire Department Chief Ed Smith, describing a search and rescue process that he estimated could take another five to seven days.

Rescue workers are also searching cars that were inundated or carried away by flood waters.

"We are going to have to search and mark each of those automobiles," the governor said.

Ordinary citizens in small boats -- who in the last few days have earned the title, "Cajun navy" -- appeared to outnumber formal rescue crews.

Among them were John Booth and Austin Tupper of Baton Rouge. The two men in their 20s had traveled 20 miles (32 kilometers) southeast to the hard-hit town of Gonzales, where they were using their private boat to help residents evacuate.

Gonzales flooded only in the last 24 hours, as waters drained south.

Rick Ramsey, the mayor of Walker -- a town of 6,000 people east of Baton Rouge -- told CBS television affiliate WAFB that his town was heavily damaged.

"We are in as good a shape as you can expect with 70 percent of our population flooded," Ramsey said.

"What you're seeing now is tremendous community spirit," he added. "People are helping each other."

The station also broadcast video from inside the city hall building of Denham Springs, also east of Baton Rouge, that showed the flooding had reached chest high before receding.

The number of people staying in shelters is fluctuating, officials said, because some people were leaving while others were entering from newly flooded areas.

Churches were accepting evacuees and donations of food, water and daily living supplies -- as were many local governments and businesses.

The National Weather Service issued 36 new flood warnings by midday Tuesday for southern Louisiana, as the levels of certain waterways continued to climb and fresh rain fell in a few areas.

Many rivers had begun to recede though, after a weekend storm deluged the region with more than 20 inches (50 centimeters) of rain in some areas, causing waterways to overflow their banks.

General » Be a reporter: Write and send your article » Subscribe for news alert
Tags: flooding, Louisiana, disasters, US