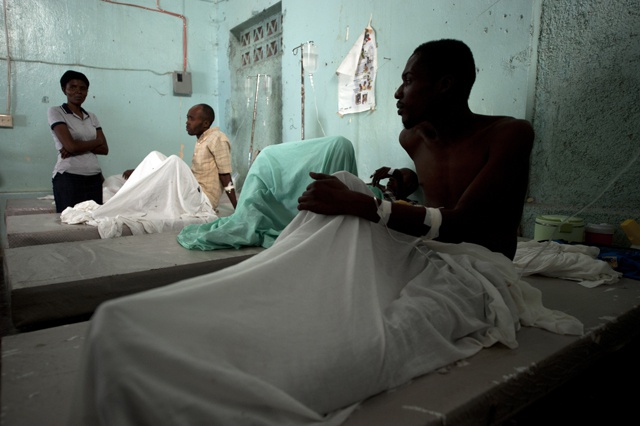 This file photo taken on December 10, 2014 shows cholera patients being treated at the Cholera Treatment Center in the Carrefour area of Port-au-Prince,Haiti. (HECTOR RETAMAL/AFP)

(AFP) - The United Nations' belated acknowledgement it played a role in a cholera epidemic in Haiti that has killed nearly 10,000 people was hailed by victims' advocates Thursday as vindication of their efforts to hold the world body accountable.

The epidemic broke out in 2010 in the vicinity of a base housing UN peacekeepers, in an impoverished Caribbean country that previously had been considered cholera-free.

UN Secretary-General Ban Ki-moon's deputy spokesman Farhan Haq promised a "significant new set of UN actions" to respond to the crisis, following a confidential report sent to the UN chief that was critical of the world body's actions.

Draft language of the report, prepared by New York University law professor Philip Alston, who serves as a special rapporteur advising the UN on human rights issues, stated that the epidemic "would not have broken out but for the actions of the United Nations," according to The New York Times.

"This is a major victory for the thousands of Haitians who have been marching for justice, writing to the UN and bringing the UN to court," said Mario Joseph, a Haitian human rights lawyer representing victims of the epidemic.

"It is high time for the UN to make this right and prove to the world that 'human rights for all' means for Haitians too."

Already one of the world's poorest countries, Haiti was still reeling from a devastating earthquake on January 12, 2010 that killed more than 200,000 people when its misery was compounded by the cholera outbreak.

The first cases appeared in October 2010 on the banks of the Artibonite River, near a base where Nepalese members of the UN peacekeeping mission were quartered in the central town of Mirebalais.

"Over the past year, the UN has become convinced that it needs to do much more regarding its own involvement in the initial outbreak and the suffering of those affected by cholera," Haq said.

The spokesman said the new response would be released publicly within the next two months, after it has been agreed with Haitian authorities and discussed with member states. Alston's report will be released in late September.

"The UN must follow this announcement with action, including issuing a public apology, establishing a plan to provide compensation to the victims who have lost so much, and ensuring that cholera is eliminated in Haiti through robust investment in water and sanitation infrastructure," said Beatrice Lindstrom, staff attorney at the Institute for Justice and Democracy in Haiti.

"We will keep fighting until it does."

French epidemiologist Roland Piarroux has said the scope of the cholera epidemic is "unprecedented" in recent history.

As early as November 2010, Piarroux had concluded that the epidemic had been imported from outside the country.

Despite numerous scientific studies backing that conclusion, the United Nations had until now refused to acknowledge any responsibility in introducing the disease in Haiti, saying it was impossible to authoritatively determine the source of the epidemic.

US courts have rejected complaints filed by families of cholera victims in New York, where the UN is headquartered, due to the world body's immunity.

And that is not likely to change, with a UN official saying that "the UN legal position has not changed."

Cholera, which is transmitted through contaminated drinking water and causes acute diarrhea, is a major challenge in a country with poor sanitary conditions.

Some 72 percent of Haitians have no toilets at home and, according to the UN, 42 percent still lack access to drinking water.

Researchers have made alarming forecasts.

In a report earlier this month, Piarroux found more than 21,000 cases and 200 deaths took place from January to June.

"With a rainy season that will last through November or possibly December, we worry that cholera will be especially deadly this year, easily killing 400 or 500 people."

Africa to be declared polio-free