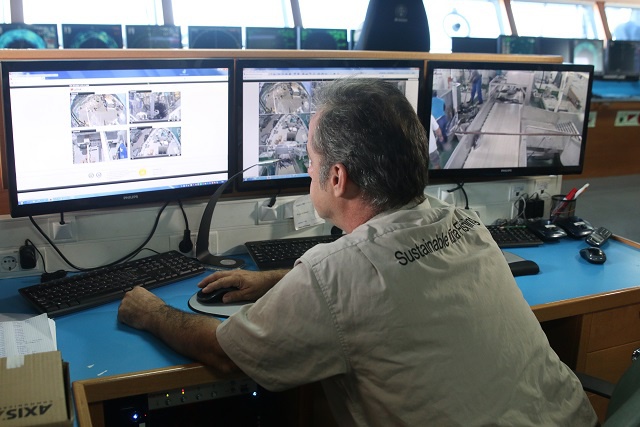 An amount of $50,000 has been invested in the project by the Global Environmental Fund (GEF) and the Organisation of Associated Producers of Large Tuna Freezers (OPAGAC).(Joe Laurence, Seychelles News Agency)

The installation of electronic surveillance cameras on two purse seiners was done by the Seychelles Fishing Authority (SFA) with the assistance of the Common Oceans ‘Areas Beyond National Jurisdiction’ (ABJN) Tuna Project.

The cameras record in real time for the duration of the fishing trip, which is usually around 25-40 days. The video footage -- stored on a hard disk -- is then removed and viewed by what SFA calls ‘dry observers’ based at the headquarters as soon as the vessel arrives in the port.

The acting chief executive of the Seychelles Fishing Authority, Roy Clarisse, told SNA that this will complement the work of human observers on fishing vessels who are alreday recording information and submitting reports.

This will also help to improve the quality of scientific data collected.

“We are using this electronic system to validate information from both sides so that at the end of the day we can say that with the video footage captured onboard fishing vessels, the information produced is equivalent to that recorded by human observers onboard,” said Clarisse.

Clarisse says the EMS will not replace the work done by human observers but has its advantage in different situations.

“EMS can be useful in situations where a human observer cannot be placed onboard a vessel because there is not enough space,” he said.

SFA's acting chief executive added that: “A human observer can only be on one vessel, in one location at one time, whereas when you have seven cameras on a vessel filming different locations at one time, it gives the dry observer in the office an advantage on the operation.”

Clarisse said the pilot project is the result of a Memorandum of Understanding signed recently between SFA and the Organisation of Associated Producers of Large Tuna Freezers(OPAGAC).

An amount of $50,000 has been invested in the project by the Global Environmental Fund (GEF) and the OPAGAC. The tuna organisation has also provided the two Spanish owned purse seiners where seven cameras have been installed to record their fishing operations.

If the project is successful, SFA will decide with the government’s approval to implement a policy whereby all fishing vessels operating in Seychelles’ waters will have to install the EMS.