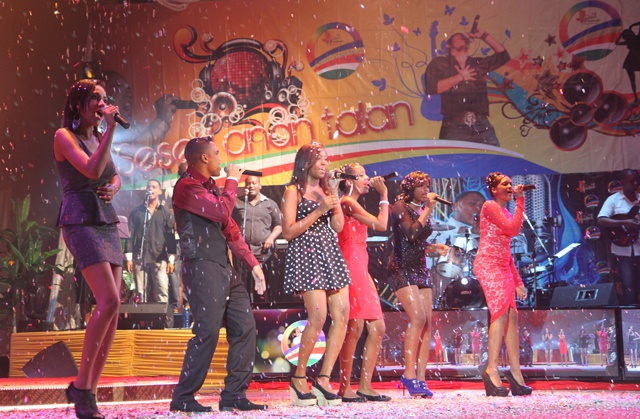 6 finalists sing together a finale song to celebrate the end of the 2014 Sesel i Annan Talan contest (Mervyn Marie, Seychelles News Agency

(Seychelles News Agency) - Shamma Damoo and Audrey Philoé are the winners of the singing talent contest ‘Sesel i Annan Talan’ (Seychelles Has Got Talent), the Indian Ocean islanders' mix between US talent competition ‘American Idol’ and ‘Britain's Got Talent’ competition in the UK.

The two young ladies sang their hearts out to a large audience at the International Conference Centre in the capital Victoria, where the judges proclaimed the winners this evening in the finals of the competition and they were presented with their prizes by Seychelles President James Michel.

Nelly Barbé and Barbara Lepathy both from Praslin, the second most populated Seychelles Island emerged as the winners of the People’s Choice award based on nationwide votes received from the public who used SMS text message services to vote for their favourite singer.

Thousands watched the show from home thanks to a live broadcast of the event by the national television broadcaster Seychelles Broadcasting corporation, (SBC) hosted by popular TV host Raymond Clarisse.

At the end of the over two and a half hour show Jany De Letourdie, Patrick Joseph, and Jean-Marc Volcy, three well known Seychellois singers and musicians, given the task of judging the contest since the beginning, delivered the results.

Speaking live on the SBC, the artistic director of the show, legendary Seychellois singer and songwriter Patrick Victor said the 6 contestants had really evolved over the last three months.

“It has shown who can work hard to endure the path of an artist. ‘Seychelles has got talent’ can be described as a cruel competition as it is tough…but I believe this is good for the youths to know that being an artist is a career that requires discipline,” said Victor.

The six young aspiring singers competed in two categories, three in the 12 – 17 years category and the remaining 3 in the 18-35 category.

Starting at the end of February, they were picked following a series of elimination rounds, where over 100 young singers were auditioned.

All 6 finalists had to sing three songs, one chosen by the judges,a Seychellois Creole song in the mother tongue of the Seychellois people, as well as a song of their choice.

The Sesel i Annan Talan contest started in 2010 and this year is the 4th edition, after a break last year.

It is organised by the Jj Spirit Foundation, a youth organization which has over 10,000 ordinary members in Seychelles and 300 affiliate members, mostly from overseas.

Seychelles President James Michel is the patron of the organisation.