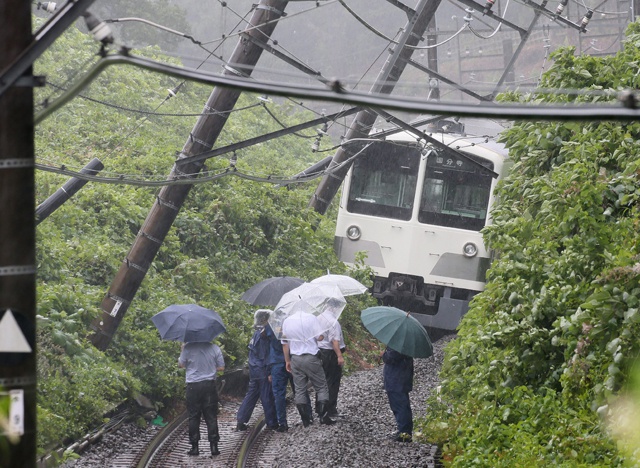 This picture taken on August 22, 2016 shows a derailed train in a landslide on the Seibu Tamako line in Higashimurayama, western Tokyo. (JIJI PRESS / AFP)

(AFP) - A strong typhoon dumped heavy rain that caused flooding on Japan's northern island of Hokkaido on Tuesday after killing one person near Tokyo and injuring dozens.

A woman in Sagamihara city outside Tokyo died on Monday as a result of the storm, according to the Kanagawa prefecture government.

Neither the police nor local authorities had immediate details as to how she died, but media reports said the 58-year-old caregiver was riding a bicycle when swept away by flood water.

The death came after another storm, Typhoon Kompasu, hit Hokkaido on Sunday, killing a man in his 40s. His body was found Monday near his vehicle, which was stranded by flood water, according to the national Fire and Disaster Management Agency.

Kompasu was downgraded to a temperate depression by early Monday and moved out over the Sea of Okhotsk.

But Mindulle was still dumping heavy rain on Hokkaido, where officials have issued warnings for landslides, flooding, violent winds and high waves.

Mindulle caused at least 61 injuries as it whirled across Japan's northeastern region, according to national broadcaster NHK.

Across the nation, Mindulle caused the cancellation of more than 500 flights, mainly to and from Tokyo's Haneda airport, on Monday.

Narita international airport east of Tokyo closed its runways in the afternoon for about an hour as officers evacuated the control tower due to strong winds.

More than one million people across Japan's eastern region were covered by evacuation advisories of varying degree since Saturday, according to the Fire and Disaster Management Agency.

In Hokkaido, more than 2,700 people temporarily fled their homes to public shelter between Saturday and late Monday, the local government said.

In Tokyo, Mindulle flooded rivers and snapped trees, including one that fell on rails at a train station in central Tokyo, causing the temporary suspension on Monday of the loop line that circles Tokyo's urban core.

The Japan Meteorological Agency said the storm was on track to leave Japan by midday, also over the Sea of Okhotsk.