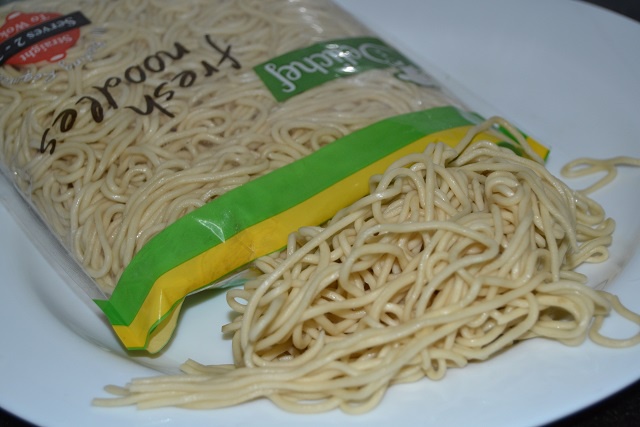 Fresh noodles produced by a Seychellois company hit the market last week. The young entrepreneurs behind the project say there is a market for their product as no other company is producing freshly-made noodles. (Delichef)

(Seychelles News Agency) - A plate of stir-fried noodles is quite common in the Seychellois kitchen, and now food lovers in the island nation can find fresh noodles made locally after a Seychellois-owned company, Delichef, launched last week.

Business partners Mervin Pool and Elton Moustache, who say they are passionate about cooking, told SNA that they wanted to come up with an innovative product – noodles that can go straight from the packaging and into the pan.

Pool explains that he learnt the art of making fresh noodles in the neighbouring Indian Ocean island Mauritius, where he spent seven years working as a Christian missionary.

“Seychellois who travel to Mauritius always try the fresh noodles which is a popular dish there so I decided to bring the product closer to home,” Pool told SNA.

He explains that his passion to find innovative ways to develop resources and create wealth derives from his work as a missionary, who are encouraged to raise their own funds.

The launch of Delichef’s noodles on the local market has materialized on Pool’s second attempt at noodle making.

The 34-year-old entrepreneur first tested the local market in 2013, but encountered difficulties with local authorities.

“The small place I had for production back then did not receive approval for food production and my packaging, which was a simple clear plastic bag, was also not validated,” he said to SNA.

Pool eventually teamed up with Elton Moustache, a software developer, to work on a new business plan, which received the authorities’ approval a year ago.

The two have invested some $38,000 (500,000 Seychelles rupees) to buy equipment, chose new business premises, and started production two weeks ago.

Delichef’s basic ingredients for fresh noodles are flour, water and potassium carbonate, which are mixed together. The noodles are then cut and pre-cooked in boiling water under Pool’s watchful eyes.

“Noodle making is a science and an art in itself. I use the machine to speed up the process but I can make noodles without the use of this machine. It is all about the noodle maker,” said Pool.

Delichef’s fresh noodles now properly packaged, with proper labeling are on sale at various outlets, with the retail prices ranging between $2.50 and $3.

Moustache, who was responsible for the branding, is now marketing the product. He says there is a market for their product as no other company is producing freshly-made noodles.

“The taste and texture of our product is totally different from any other noodles you’ll find on the market,” said Moustache.

The product is already receiving positive feedback from local customers.

Speaking to SNA, Marinette Albest said: “I prepared the noodles with chicken, spring onions sprinkled with garlic sauce and vinegar. It’s one of the best noodles I have tasted.”

While there are different ways of preparing the fresh noodles, Pool shared two of his favourite recipes.

Delichef has set a one-week shelf life for its product and advises that it it should be kept refrigerated upon purchase until the noodles are ready to be cooked.

The company confirmed it is presently working with the Seychelles Bureau of Standards to establish a standard for the fresh noodles.

Having achieved their dreams of coming out with an innovative product for the Seychellois market, Pool and Moustache are encouraging other young entrepreneurs to follow their own dreams and persevere in spite of hiccups and difficulties encountered along the way.

“For us it’s not just noodles, it’s our future, it’s about creating wealth. It’s about the whole spirit of entrepreneurship,” said Pool.

More details about Delichef’s product can be viewed at www.delichef.info or on their Facebook page Delichef.