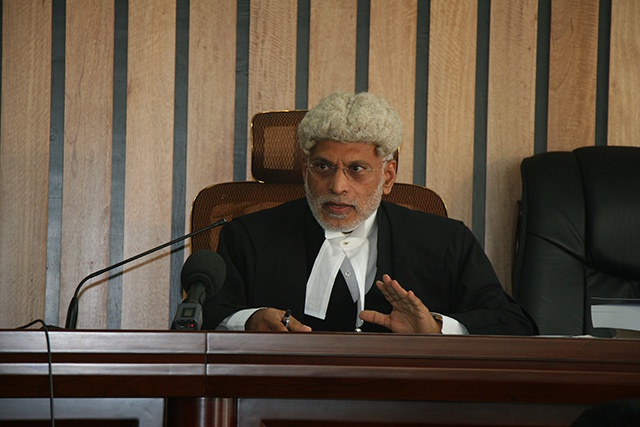 (Seychelles News Agency) - The Seychelles Electoral Commission has announced its decision to strike the names of two political parties from the official registrar in accordance with a Supreme Court ruling delivered earlier on Tuesday.

Supreme Court Judge Durai Karunakaran had given the Electoral Commission 24 hours to comply with a court order upholding a previous ruling prohibiting the registration of Linyon Sanzman and Lafors Sosyal Demokratik (LSD) as political parties.

The decision comes barely two weeks before parliamentary elections set for September 8 to 10 on the island nation. Tuesday’s ruling mean only three parties – Parti Lepep, the Seychelles Patriotic Movement and Linyon Demokratik Seselwa, along with three independent candidates -- will stand in the upcoming polls.

In a press statement issued Tuesday afternoon, the Electoral Commission said the removal of the two names from the register of political parties takes “immediate effect.”

Judge Karunakaran had delivered the same ruling last Wednesday, prohibiting the registration of the two party names until further notice, as well as prohibiting the commission from accepting, approving or registering nomination of candidates submitted by both parties.

The judge also called on the Electoral Commission to strike off and cancel any approval or registration of candidates of both parties that had already been accepted, approved or registered.

His orders were in response to two petitions lodged before the court by an opposition coalition – Linyon Demokratik Seselwa (LDS).

The petitioner had asked for a ‘judicial review’ of the Electoral Commission’s decision to register LSD as a political party, arguing that the name Lafors Sosyal Demokratik (LSD) “is identical or so nearly resembles the name that of Linyon Demokratik Seselwa (LDS).”

In the case of Linyon Sanzman the petition was submitted a day after the Electoral Commission had informed the party’s leader Martin Aglae that he could use the name which was the subject of a previous case heard by Judge Bernadin Renaud.

A coalition formed by members of four opposition parties now known as LDS who had planned to register the name Linyon Sanzman as the banner under which they would contest the upcoming National Assembly elections had submitted a petition before the Supreme Court to contest the registration of their planned name by another political group.

Last week, Judge Karunakaran had set September 21 for the case relating to the use of the two names to be heard before the court.

The Election Commission, which received the court orders on Thursday, August 18 -- a day after the registration of candidates -- had decided not to comply and instead asked the court to move the hearing of the case at an earlier date.

In response to the Electoral Commission’s decision, the opposition coalition LDS filed another case for contempt of court before the Supreme Court which led to Tuesday’s ruling.

"For the first time, a judge told the Election Commission that his order should be respected and gave Mr Gappy [Hendrick Gappy – Chairman of the commission] 24 hours to remove the names of Linyon Sanzman and LSD," the lawyer of LDS, Anthony Derjacques told SNA.

"I am extremely disappointed with the legal system that we have ... the court does not want to understand that the order it had issued was not addressed to the right person," Aglaé told SNA.

The Electoral Commission could still appeal the decision, but the judges of the Court of Appeal will not be meeting before the September parliamentary elections.

One of the main parties in this case, Martin Aglaé, who registered Linyon Sanzman, has warned that he would protest against the decision of Judge Karunakaran. Aglae had decided join with Lafors Sosyal Demokratik (LSD) registered by Jimmy Gabriel to contest the legislative polls.

"Judge Karunakaran has rejected all of the lawyers’ propositions, even before this case he had already shown the direction he wanted to take," the Linyon Sanzman leader Martin Aglae told SNA.