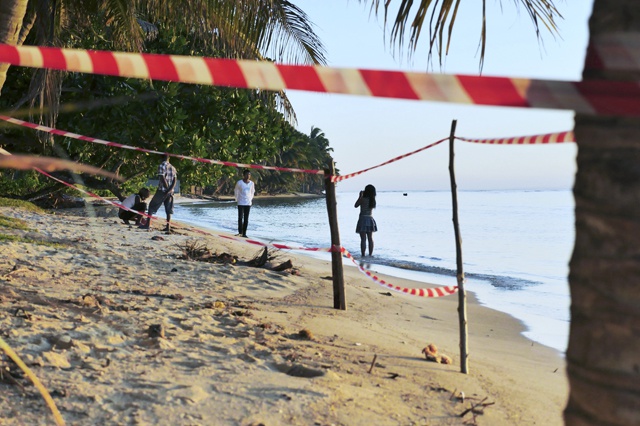 Tourists take pictures at sunset on August 22, 2016 by a cordoned section of a beach were two French people were found dead, on August 21, 2016 in Sainte Marie Island, an island off the northeast coast of Madagascar. (Sarah Tétaud / AFP)

(AFP) - Police investigating the double murder of two French volunteers on an island off Madagascar have arrested seven suspects.

Authorities arrested four people who were at the same nightclub as the two victims on Sunday, but have not yet established a firm link to the murders.

Prosecutor Thierry Rajaona Lauret, who is running the investigation, said three more suspects -- a French national living on the resort island of Sainte Marie, and two Madagascans -- were arrested on Tuesday.

There is "no doubt" the two volunteers were murdered, police said. "We just need to determine a motive."

The bodies of the two French citizens, a man and a woman aged in their 20s, were found Sunday on a beach of Sainte Marie with head injuries.

They had been volunteering at Cetamada, a local environmental non-profit organisation working to protect ocean mammals.

According to authorities on Sainte Marie, an island famous for eco-tourism, it is the first time French citizens have been murdered there.

A year later, two Europeans were attacked and killed by a mob on the northwest island of Nosy Be, suspected of involvement in the death of an eight-year-old local boy.