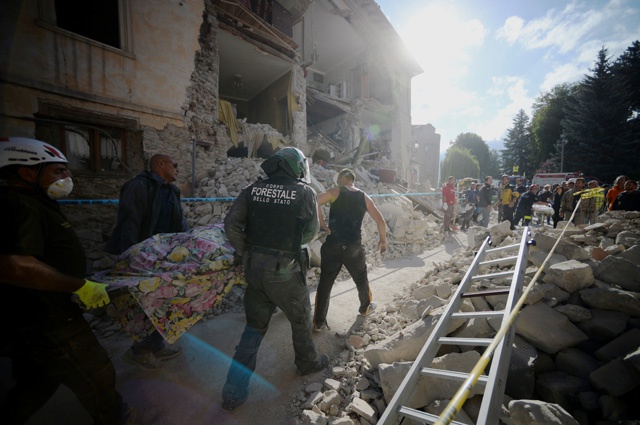 Rescuers carry the body of a victim next to the rubble of buildings in Amatrice on August 24, 2016 after a powerful earthquake rocked central Italy. (FILIPPO MONTEFORTE / AFP)

Scores of buildings were reduced to dusty piles of masonry in communities close to the epicentre of the quake, which had a magnitude of between 6.0 and 6.2, according to monitors.

It hit a remote area straddling Umbria, Marche and Lazio, to the north of a region devastated by a quake in 2009, rousing residents and vacationers in terrifying fashion.

Italy's civil protection unit said in the first official death toll there had been 38 deaths in and around the villages of Amatrice, Accumoli and Arquata del Tronto.

"There are still so many people under masonry, so many missing," said Immacolata Postiglione, the head of the unit's emergency department.

"My sister and her husband are under the rubble, we're waiting for diggers but they can't get up here," Guido Bordo, 69, told AFP in the tiny village of Illica, near Accumoli.

"There's no sound from them, we only heard their cats. I wasn't here, as soon as the quake happened I rushed here. They managed to pull my sister's children out, they're in hospital now," he added, anxiously clasping and unclamping his hands.

Other victims included a nine-month-old baby whose parents survived.

But two other children aged four and seven were saved by their quick-thinking grandmother, who ushered them under a bed as soon as the shaking began, according to reports.

- 'Half the village disappeared' -

It was Italy's most powerful earthquake since 2009, when some 300 people died in and around the city of L'Aquila, just to the south of the area hit on Wednesday.

Prime Minister Matteo Renzi cancelled a planned trip to France for a meeting with European Socialist leaders and other engagements to oversee the response to the disaster.

"The situation is dramatic, there are many dead," said Amatrice mayor Sergio Pirozzi. "Half the village has disappeared."

"To hear the mayor of Amatrice say his village no longer exists and knowing that there are children among the victims, is very upsetting for me," he said.

Civil Protection chief Fabrizio Curcio classed the quake as "severe". The shocks were strong enough to wake residents of central Rome, some 150 kilometres (90 miles) away.

The worst damage was suffered by Pescara del Tronto, a hamlet near Arquata in the Marche region which "just completely disintegrated" according to local mayor Aleandro Petrucci.

Ten bodies had been recovered there by midday and rescuers were braced for further fatalities.

Accumoli mayor Stefano Petrucci fought back tears as he described the scenes as "a tragedy."

"There are people under the ruins, it is not a good situation."

Amatrice is a hilltop beauty spot famed as the home of amatriciana, one of Italy's favourite pasta sauces, and is a popular destination for Romans seeking cool mountain air at the height of the summer.

The first quake measured 6.2, according to the United States Geological Survey (USGS), which said it occurred at a shallow depth of 10 kilometres (six miles). It measured 6.0 according to Italian monitors.

In 2009, a 6.3-magnitude earthquake struck close to the university city of L'Aquila in the Abruzzo region and left more than 300 people dead.

That disaster led to lengthy recriminations over lax building controls and the failure of authorities to warn residents that a quake could be imminent.

David Rothery, Professor of Planetary Geosciences at Britain's Open University, said Wednesday's quake had been similar to the 2009 one.

"Both occurred at a shallow depth, which exacerbates the shaking at the surface," he said.

"Unlike the L'Aquila quake, which was preceded by swarms of smaller quakes and led to claims -- unjustified in my view -- that the eventual big quake should have been predicted, this one appears to have struck out of the blue."

Italy is often shaken by earthquakes, usually centred on the mountainous spine of the boot-shaped country.

Another quake hit the northern Emilia Romagna region in May 2012, when two violent shocks 10 days apart left 23 people dead and 14,000 others homeless.

General » Be a reporter: Write and send your article » Subscribe for news alert
Tags: earthquake, Italy