Seychellois mountaineer climbs some of the world’s highest peaks 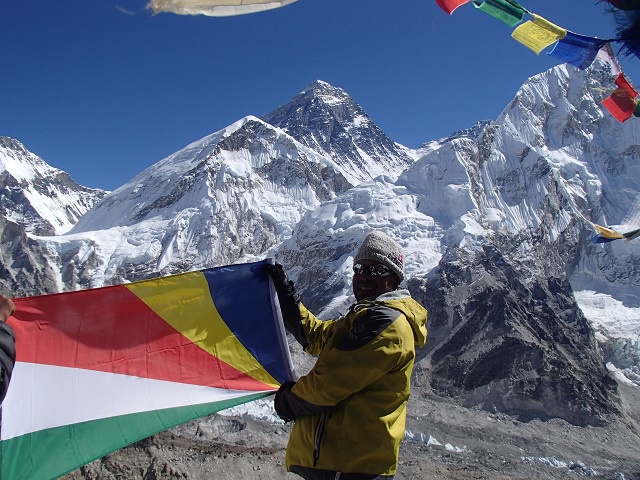 Seychellois Allen Bonnelame started to climb some of the world’s highest peaks in 1994 and has climbed four mountains above 4,000 metres since then. (Allen Bonnelame)

(Seychelles News Agency) - A Seychellois mountaineer living abroad is climbing some of the world’s highest peaks and is dedicating his exploits to fellow compatriots in his homeland.

Allen Bonnelame, who has been living in France for 27 years, told SNA he took up mountain climbing as a hobby in the early 1990s and began dedicating more time to it about a decade ago.

“It is a passion that takes a lot of time and training. It keeps me in shape and good physical condition. I dedicate these climbs to my Seychellois brothers and sisters,” said Bonnelame, a father of two.

Born in Seychelles, an archipelago in the western Indian Ocean, Bonnelame developed his passion for climbing with the help of his friend and doing research.

“I learned with friends who are passionate about mountains and by research and reading books on mountain climbing,” Bonnelame told SNA.

Bonnelame said that since he started in 1994, he has climbed four mountains above 4,000 metres. The highest one was Mount Kilimanjaro, the highest peak in Africa, located in Tanzania at 5,895 metres.

The most difficult one was Mont Blanc because it was quite technical, said Bonnelame. Mont Blanc -- the highest peak in Western Europe at 4,808 metres -- is located in the Alps, which is the largest mountain system in Europe with the highest fatality rate.

The other two mountains were the base camp of Mount Everest in Nepal at 5,364 metres and Mount Toukbal (4,167 metres) -- the highest peak in the Atlas Mountains in Morocco.”

Bonnelame is hoping to continue his passion by climbing two other mountains. “I would like to climb the Himalayas and perhaps the Chimborazo in Ecuador.

The Himalayas are home to the world’s highest mountain -- Mount Everest at 8,848 metres. The mountain range stretches across Pakistan, India, Bhutan, Nepal and China. Chimborazo is the highest peak in Ecuador and the closest to the equator.