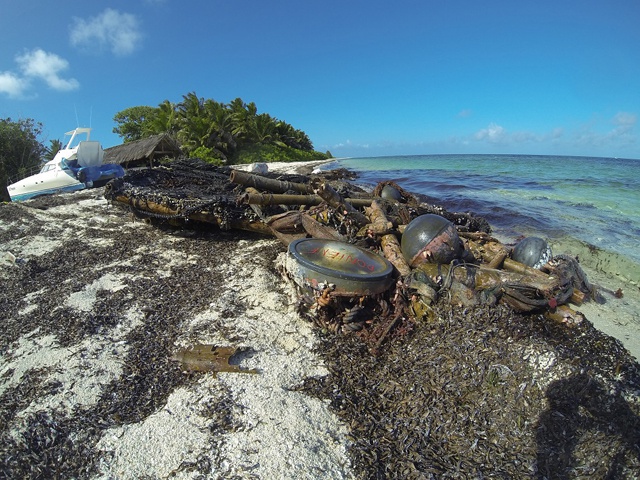 (Seychelles News Agency) - Seychelles is taking steps to limit the damaging effects of fish aggregating devices (FADs) on the island nation’s reefs and other marine life through a new project that aims to intercept the fishing devices before they are washed up on the beaches, especially around the outer islands.

Gathering data on the seriousness of the issue around the Seychelles’ islands and getting the fishing industry – in this case the purse seiners -- to realize and contribute towards the cost of FAD clean-ups are the secondary aims of the project.

The Island Conservation Society's Project and Science Manager Pierre-Andre Adam explained that software will be inputted on a computer at the organisation’s head office which will work as an alert system, since the fishing devices are equipped with GPS.

“We’ll get alerts whenever there’s a FAD in the region of one of the islands where we have a presence whereby we can inform our conservation officers so they can plan their work around getting out and intervening and intercepting the FAD,” Adam told journalists during an interview.

Fishing is the second pillar of the Seychelles economy – a 115-island archipelago in the western Indian Ocean. Some 50,000 tonnes of tuna are caught in the Seychelles Exclusive Economic Zone according to the fishing authority, although nearly 300 tonnes of tuna caught within the western Indian Ocean waters are landed and transshipped in Port Victoria.

The FAD Watch Programme has been described as the first of its kind. The chief executive of the Island Development Company (IDC), Glenny Savy, says the company will take the responsibility of intercepting the FADs that end up close to the other outer islands where ICS is not present.

“It’s a pilot project it will depend on the state of the sea, the facilities on the islands allowing us to get to the FADs before they land on the reefs and whether we can bring them ashore until the fishing boats or bigger vessels can recover them,” said Savy.

Fish aggregating devices are free-floating platforms equipped with a GPS, which over the years has witnesses an increased use by the tuna purse seine industry to attract large concentrations of fish.

They are commonly made up of a 2x2 metre wide bamboo raft covered with shade material and fishing nets or ropes hanging down from the corners to a depth of 20 to 50 metres.

Seychelles and the wider Indian Ocean region have also recorded an increase in the use of the devices since the early 1990s.

The increased catch of juvenile target fish, in this case tuna, as well as by-catch of non-targeted species are some of the problems associated with the use of FADs. For Seychelles, another equally important issue is the damages that lost or discarded FADs have on the coral reefs as well as to marine species such as sea turtles that can often get caught into the nets and drown.

Jeanne Mortimer, who has a long career in sea turtle conservation says the use of FADs remains “a controversial fishing activity.”

“We do see dead animals in the FADs. Sometimes we’ve had dead turtles dead shark but it’s difficult to get an overall view of how that’s affecting the western Indian Ocean.”

ICS has been dealing with the problem of FAD clean-up and has rescued marine species caught in such devices. The environmental NGO also highlighted the cleanup costs and the environmental dangers that these devices impose with representatives of the tuna fishing industry and fisheries managers during the Indian Ocean Tuna Commission (IOTC) Working Party on Ecosystems and Bycatch in September last year.

Giving the example of the Alphonse group of islands situated 400 kilometres southwest of the main island of Mahé where ICS has a permanent presence, Adam said 58 such devices were collected over a period of 18 months since an active collection of data started.

“We are yet to implement such systems across on the other islands where we are based but this will be developed under the new programme,” Adam added.

The project is one which will surely bring substantial costs to the organisations involved. Savy said: “It’s being financed by the purse seiners themselves in the sense that they will have to reimburse the costs incurred when we do this exercise.”

While several nations have purse seiners fishing in the Seychelles waters, so far it’s only the Spanish tuna boat owners associations of tuna freezer vessels (OPAGAC) that has agreed be part of the pilot project.

According to the Seychelles Fishing Authority’s acting chief executive Roy Clarisse, discussions have started with organisations representing other countries to voluntarily come onboard.

The new project, the Seychelles authorities say, is also part of efforts to continuously take measures to ensure the sustainability of the industry.

During a meeting of the Indian Ocean Tuna Commission (IOTC) during which it was decided to reduce fishing allowances of the yellowfin tuna by 15 percent beginning next year, it was also agreed that fishing gear and devices such as FADs will also be reduced from 550 to 425 per ship.

Clarisse confirmed that purse seiners are allowed to have 850 such devices in total although 425 have to be activated at any given time.

This according to Savy already represents a significant improvement from 3,000 to 4,000 FADs being deployed by purse seiners before the reduction in their quota for such fishing devices.

While the FAD Watch programme will see mainly the FADs deployed by Spanish tuna vessels being intercepted before they land on the beaches, those used by other vessels that end up around the reefs will still have to be picked up by the teams present on those islands.

Savy says data of the various clean-up, transportation exercise gathered will allow the Seychelles authorities to have concrete facts about the seriousness of the issue.

“I think what we are trying to do is save our seas by being collaborative and then eventually get them to pay their cost of collecting and recycling their FADs," Savy said, adding that “hopefully 10 years from now the action the decisions we are taking today will lead to a no FAD policy down the line.”