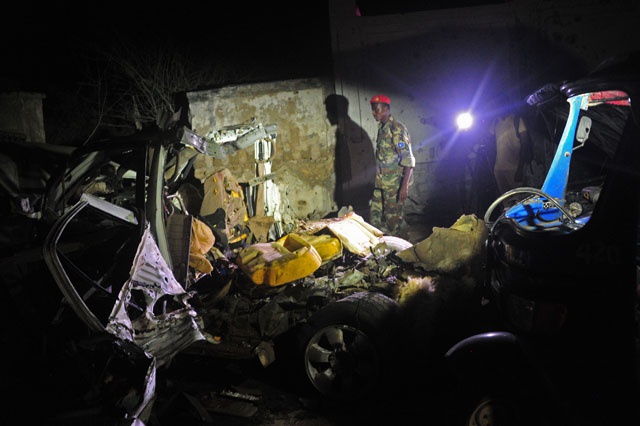 A Somali soldier stands next to the wreckage of car bomb outside a beach restaurant in Somali capital Mogadishu, on August 25, 2016 after an attack by alleged Al-Qaeda-linked Shebab rebels. (Mohamed ABDIWAHAB / AFP)

(AFP) - Seven people were killed in an attack by Shabaab jihadists on a beachfront restaurant in the Somali capital Mogadishu, a spokesman for the city authorities said on Friday.

The restaurant is popular with young people and government officials. Around 20 people managed to escape from the restaurant during the gunfight.

By Friday morning officials said the attackers had been killed.

All the "attackers have been gunned down and the restaurant is now under the full command of the Somali government soldiers," regional police commander Colonel Abshir Bishaar told the Somali National News Agency.

"The terrorist attack killed nine persons, five of them were civilians, two security forces and the other two were the militants who carried out the attack," Bishaar said, adding that two other civilians were injured.

It is the second time this year the group has attacked the Lido beach area and its many eateries, including upmarket establishments popular with business people and diaspora Somalis who have returned home to the city.

The group is expected to try and violently disrupt elections due to be held in September and October.

The jihadists have also staged repeated attacks in neighbouring Kenya and a recent security analysis warned the group was expanding its horizons with cells active in Djibouti, Ethiopia, Kenya, Tanzania and Uganda as well as Somalia.