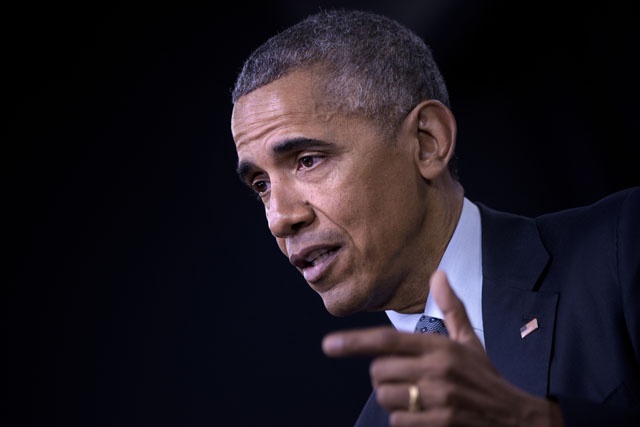 Obama's announcement more than quadrupled the size of the existing protected area, known as the Papahanaumokuakea Marine National Monument, which is now 582,578 square miles (1.5 million square kilometers) -- about four times the size of California.

The waters are home to pristine coral reefs and hundreds of animals found nowhere else on Earth, including a new species of ghost octopus discovered only this year and the world's oldest living organism, black coral, which is estimated to be 4,265 years old.

Some 14 million seabirds soar over the area and make their nests on the islands, including a 65-year-old albatross named Wisdom. The area is also home to threatened green turtles and endangered Hawaiian monk seals.

The marine monument was established in 2006 by then president George W. Bush and was designated a UNESCO World Heritage Site in 2010.

"By expanding the monument, President Obama has increased protections for one of the most biologically and culturally significant places on the planet," said Joshua Reichert, an executive vice president at the Pew Charitable Trusts.

Greenpeace also hailed what it called a "bold decision" that will ban commercial fishing and mineral extraction in the region.

US Senator Brian Schatz, a Democrat from Hawaii, said in a statement that the expansion will create "a safe zone that will replenish stocks of tuna, promote biodiversity and fight climate change."

Obama "has given Native Hawaiians a greater voice in managing this precious resource," Schatz said.

But some expressed disappointment over the move to expand the zone to 200 miles from shore, saying that it imperils fishermen's ability to make a living.

"Closing 60 percent of Hawaii's waters to commercial fishing, when science is telling us that it will not lead to more productive local fisheries, makes no sense," said Edwin Ebiusi Jr., chair of the Pacific Regional Fishery Management Council.

"Today is a sad day in the history of Hawaii's fisheries and a negative blow to our local food security."

Matt Rand, director of the Global Ocean Legacy project at the Pew Charitable Trusts, took a different view, saying that the change should have "a minimal economic impact" on fishing in the area.

The archipelago and its surrounding waters are considered a sacred area by native Hawaiians.

The White House said permits will also be available for noncommercial fishing -- including recreational fishing and the removal of fish and other resources for Native Hawaiian cultural practices -- in the area.

Obama's announcement came just days before the kickoff of a major global conservation meeting including thousands of heads of state, scientists and policy makers, which the US president is expected to address in Hawaii on September 1.

The International Union for the Conservation of Nature's world congress is held every four years at a different location around the globe. This year it runs from September 1-10.

Obama will also travel to Midway Atoll, inside the protected area, to underscore the decision.

There he will make the case that climate change "makes protecting our public lands and waters more important than ever," according to the White House.

The timing of Obama's announcement is important because it "will inspire probably the people that are most interested and most engaged in conservation globally," said Rand.

Obama has made conservation and climate change a central pillar of his presidency -- in the face of Republican opposition in Congress -- forging international climate accords and promoting national parks.

"All together, President Obama has protected more public lands and waters than any other president," said White House spokesman Josh Earnest.

"And these sites often help tell the story of significant people or extraordinary events in American history."