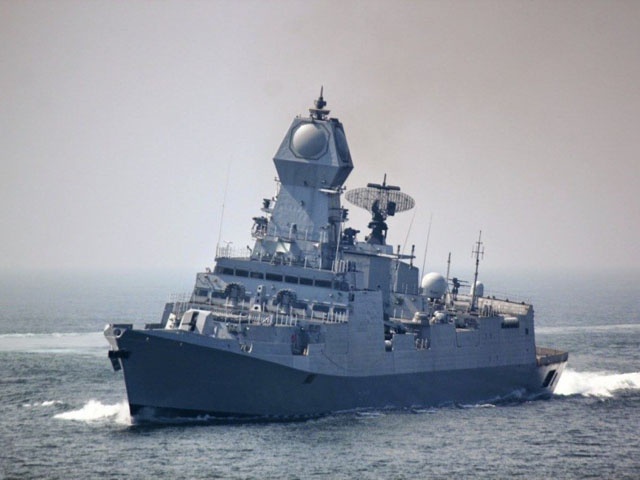 INS Kolkata - the largest destroyer of the Indian Navy, and one of three Indian warships currently in Port Victoria is on her maiden overseas deployment in the Indian Ocean Region. (Indian High Commission)

The three frontline warships of India -- INS Kolkata, INS Trikand and INS Aditya -- are under the command of Rear Admiral Ravneet Singh and will be in Seychelles until Sunday.

Attala said a team of naval officers will be sent to carry out a practice inspection on a boat to see if it is involved in any illegal activity.

“This exercise will be beneficial to both naval forces as they will have a better understanding of each other’s approach and how to coordinate their work better,” said Attala.

On Sunday the exercise will take place just off Port Victoria on Mahe, the main island of Seychelles, an archipelago in the western Indian Ocean.

In a statement to the press, the Indian High Commission in Seychelles said, “The deployment of the Indian Navy ships adds yet another chapter to the strong defence and maritime cooperation between India and Seychelles.”

The High Commission added that:“The Indian Navy has been undertaking biannual deployment towards surveillance of the Seychelles Exclusive Economic Zone  in joint operations with Seychelles Coast Guard for the past few years in pursuance of a Defence Cooperation Agreement between the two countries.”

The visit is part of its two-month-long deployment in the Southern Indian Ocean in line with the Indian Government’s vision of ‘Security and Growth for All in the Region’ (SAGAR).

One of the ships, INS Kolkata, is the largest destroyer of the Indian Navy and was commissioned in August 2014. It is on her maiden overseas deployment in the Indian Ocean Region.

While in Seychelles, the crew will also be taking part in social and charitable activities. Rear Admiral Singh and his accompanying Commanding Officers will be calling on several Seychelles top officials.

Defence and Maritime Security are one of the major fields of cooperation between India and Seychelles, which has been ongoing since the Indian Ocean island nation gained independence in 1976.