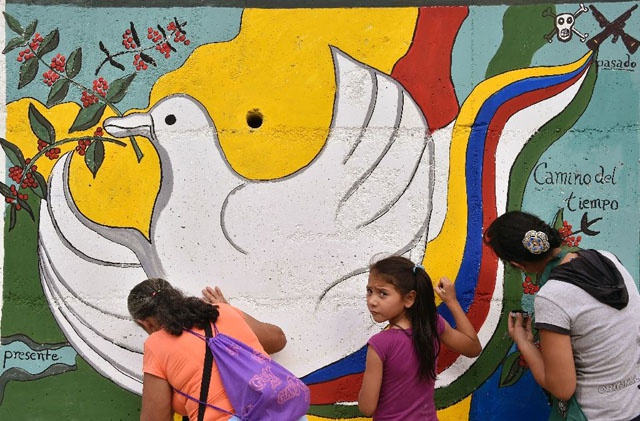 Locals paint a mural on the road leading to Planadas, Tolima department, about the peace deal between the Colombian government and FARC rebels (AFP Photo/Guillermo Legaria)

"The solemn date of the signing will be between September 20 and 26, depending on the schedules and the dignitaries who will be in attendance," said Defense Minister Luis Carlos Villegas.

Villegas did not say who would attend the official signing, nor did he give its venue. President Juan Manuel Santos has said it could be at UN headquarters, in Bogota or in Cuba.

The announcement cames three days after Colombian and FARC negotiators presented a final peace accord following nearly four years of arduous negotiations in Cuba, putting an end to their half-century civil war that cost hundreds of thousands of lives.

Santos ordered a definitive ceasefire from Monday with the FARC rebels, and the guerrillas are expected to make a similar announcement shortly.

Ahead of the final signatures, FARC rebel leaders will convene in mid-September to ratify the historic peace agreement signed with the Colombian government this week, the guerrilla group also announced Saturday.

The Revolutionary Armed Forces of Colombia (FARC) said its leaders would convene for "the last conference of our organization while it still has its arms, endorse the peace accords and make way for the transformation of the FARC into a legal political movement."

The September 13-19 conference of 200 FARC delegates -- including 29 members of its central committee -- will be open to 50 international guests as well as the press, an unusual move for the guerrillas.

"Given the historical significance of this event, the people of Colombia and the world must learn first-hand about the conference's developments and decisions," the FARC said.

The Marxist guerrillas will hold the conference in San Vicente del Caguan in southern Colombia, once a FARC stronghold.

The fate of the FARC-government peace accord now comes down to a decisive yes-or-no vote on October 2.

Santos, who has staked his legacy on the peace process, faces a tough political battle to win the referendum.

The conflict began with the founding of the FARC in 1964, when leftist guerrilla armies were fighting to sow revolution throughout Latin America.