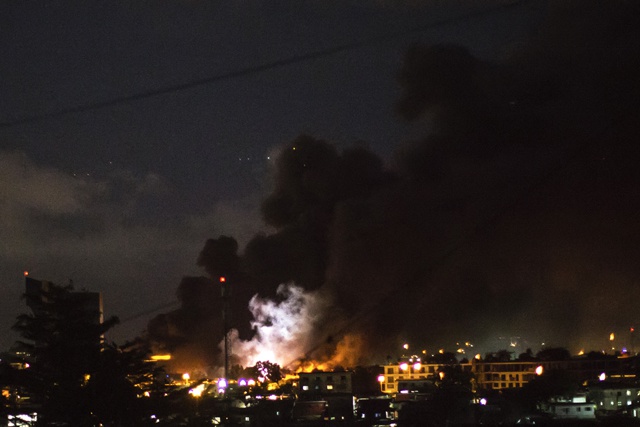 The flash of an explosion is pictured amid flames and smoke billowing from the National Assembly building in Libreville after it was set ablaze on August 31, 2016 by demonstrators protesting after Gabon's president Ali Bongo was declared winner of last weekend's contested election. (MARCO LONGARI / AFP)

Thousands of angry protesters took to the streets of Libreville accusing the government of stealing the election after Bongo was declared the winner by a thin margin over rival Jean Ping.

Gunfire crackled across the city and plumes of smoke billowed from the torched parliament building as anti-government protesters clashed with heavily armed security forces, injuring at least six people.

Security forces surrounded the opposition headquarters overnight and attempted to storm the building.

"They attacked around 1:00 am (0000 GMT). It is the Republican Guard. They were bombarding with helicopters and then they attacked on the ground. There are 19 people injured, some of them very seriously," said Ping, who was not at the party headquarters himself.

The president of the opposition National Union party, Zacharie Myboto, who was inside the besieged building, said security forces were hurling tear gas canisters and had opened fire.

"For nearly an hour the building has been surrounded. They want to enter the building... it is extremely violent," he said.

A government spokesman said security forces had stormed the opposition headquarters to catch "criminals" who had earlier set fire to the parliament building.

"Armed people who set fire to the parliament had gathered at Jean Ping's headquarters along with hundreds of looters and thugs... they were not political protesters but criminals," said Alain-Claude Bilie-By-Nze.

A heavily military and police presence had brought large parts of Libreville to a standstill and internet access has also been cut.

Results of the presidential election were announced Wednesday afternoon, handing Bongo his second term and extending the nearly five decade-long rule by his family.

The results -- which gave Bongo 49.8 percent to Ping's 48.23 percent -- remain "provisional" until they are approved by the constitutional court.

The opposition has described the election as fraudulent and called for voting results from each of Gabon's polling stations to be made public to ensure the credibility of overall outcome -- a demand echoed by the United States and European Union.

"This will help give the people of Gabon -- as well as the international community -- confidence the announced vote tallies are accurate," US State Department spokesman John Kirby said.

EU observers, who were barred from the meeting of the electoral commission on Wednesday, said the vote on Saturday was "managed in a way that lacked transparency".

Opposition delegates in the electoral commission have vowed to fight for a recount.

Any appeal by Ping -- a veteran diplomat and former top African Union official who had earlier declared himself the poll winner -- would likely focus on disputed results in Haut-Ogooue province, the heartland of Bongo's Teke ethnic group.

In Saturday's vote, turnout was 59.46 percent nationwide but soared to 99.93 percent in Haut-Ogooue, where Bongo won 95.5 percent of votes.

"It's going to be difficult to get people to accept these results," one member of the electoral commission confided to AFP, asking not to be named.

"We've never seen results like these, even during the father's time," he added.

Bongo took power in 2009 in a violence-marred election that followed the death of his father Omar Bongo, who had ruled the oil-rich former French colony for 41 years.

UN Secretary General Ban Ki-moon called for calm and expressed concern over the clashes and reports of arson, urging political leaders "to address their differences peacefully and to address any disputes they may have through existing constitutional and legal channels", the UN said in a statement.

Gabon is a former French colony that has been hit by the global slump in the price of crude oil, its biggest export.

One third of Gabon's population lives in poverty, despite the country boasting one of Africa's highest per capita incomes at $8,300 (7,400 euros) thanks to pumping 200,000 barrels of oil a day.

Bongo, 57, campaigned under the slogan "Let's change together", playing up the roads and hospitals built during his first term and stressing the need to break with the bad old days of disappearing public funds and suspect management of oil revenues.

The campaign period was marked by months of bitter exchanges between the two camps, including accusations, and strenuous denials, that Bongo was born in Nigeria and therefore ineligible to run.

Ping's own roots -- he is Sino-Gabonese -- served as ammunition for Bongo's camp, which has suggested he and his son are secretly serving Chinese interests.