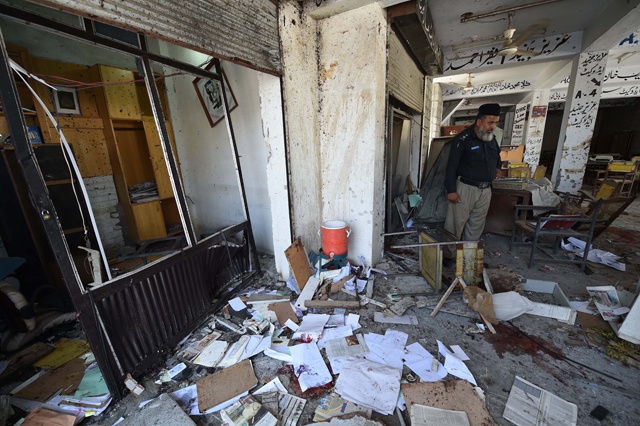 A Pakistani police officer inspects the site of a suicide bomb attack at a district court in Mardan on September 2, 2016. (A MAJEED / AFP)

(AFP) - At least 14 people were killed and more than 50 wounded after a suicide bomber attacked a court in the Pakistani city of Mardan Friday, police said, the latest assault targeting Pakistan's legal community.

The bomber shot his way through the main gate leading to the district court, before throwing a hand grenade and detonating his suicide vest among the morning crowds, senior police official Ejaz Khan told reporters.

Amir Hussain, president of the Mardan Bar Association, said he was in a room nearby when the bomb detonated.

"There was dust everywhere, and people were crying loud with pain," he said.

His suit drenched in blood, he added: "I started picking up the wounded and putting them in cars to take them to hospital. I did not know if the people I was rescuing were dead or alive."

Lawyers were being targeted because they are "an important part of democracy, and these terrorists are opposed to democracy," he said.

"Our morale is not dented. It is still high," he added.

Nasir Khan Durrani, provincial police chief, told AFP the death toll had reached 14, with at least 58 people wounded, three of whom were critical.

Officials said the bomber had up to eight kilogrammes of explosives packed into his vest, while the dead included lawyers and police.

No group has yet claimed responsibility for the attack, which comes three weeks after a massive suicide blast killed scores of lawyers in the southwestern Pakistani city of Quetta, in Balochistan.

Friday's blast came as security forces fended off four suicide bombers who were trying to attack a Christian colony near the Khyber Pakhtunkhwa provincial capital of Peshawar, 60 kilometres (37 miles) to the west of Mardan.

All four attackers were killed along with a guard at the entrance to the colony, an army statement said.

Jamaat-ul-Ahrar (JuA), a faction of the Pakistani Taliban, claimed responsibility for the attempt.

The group has also said it was behind the attack on lawyers in Quetta, which killed 73 people on August 8, as well as the Lahore Easter bombing which killed 75 people in Pakistan's deadliest attack this year.

Discrimination and violence against religious minorities is commonplace in Pakistan, where Muslims account for more than 90 percent of the population, while the legal community are also frequently the subjects of targeted killings.

"Armed groups are seeking to undermine the rule of law by targeting both the people who defend it in court and the people it should protect."

The Pakistani Taliban in particular routinely target minority groups and soft targets such as courts and schools.

The army launched an operation in June 2014 in a bid to wipe out militant bases in the tribal areas and so bring an end to the bloody insurgency that has cost thousands of civilian lives since 2004.

Pakistani Prime Minister Nawaz Sharif condemned Friday's attacks, adding that militants were on the back foot and were "showing (their) frustration by attacking soft targets".

"They shall not get space to hide in Pakistan," he added.