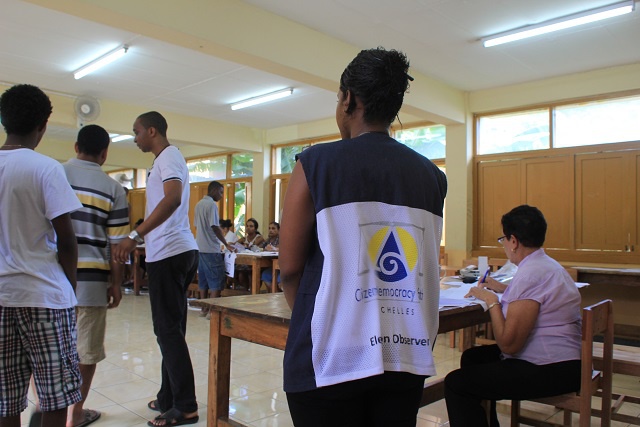 Two local observer groups -- Citizens Democracy Watch Seychelles (CDWS) and the Association for Rights, Information and Democracy (ARID) -- are also gearing up for the polls.

Headed by the Tanzanian Minister of Foreign Affairs and East African Cooperation, Dr Augustine P Mahinga, the SADC observer mission was launched on Friday at the Avani resort on the western side of the Seychelles main island, Mahé. Dr Mahinga said that the SADC mission is being guided by the revised SADC principles and guidelines governing democratic elections, adopted in 2015.

SADC observers are from 8 member countries

Nineteen observers from eight of SADC’s 15 member countries are part of the mission. SADC’s Director of the Organ on Politics, Defence and Security Affairs Jorge Cardoso confirmed on Friday that the 19 observers will be deployed to voting stations covering all of the 25 electoral districts, including on the main island Mahé, as well as on Praslin, La Digue and Silhouette.

The head of the SADC mission, Dr Mahinga, has expressed hope that the deployment of the SADC observers will contribute to the enhanced credibility of the overall process.

“As SADC observes these elections, it encourages the Electoral Commission of the Seychelles to conduct its work to the highest professional standard; the political leadership to play an exemplary role in terms of electoral conduct; and the electorate to act conscientiously and honourably,” he added.

SADC had sent preparatory mission led by the organisation’s advisory council at the end of August, which was an opportunity for them to meet and hold discussions with various stakeholders including the media, electoral commission, political parties, candidates, religious groups among others. Dr Mahinga said that they have taken note of issues raised by the stakeholders regarding the preparations and management of the electoral process.

The SADC electoral observer mission is expected to present its preliminary statement on September 12. This is expected to be followed by a final report 30 days later.

The African Union has also confirmed the deployment of a “Woman-only Short-Term Election Observer Mission” for the Seychelles legislative polls. The AU team led by Fatuma Ndangiza is scheduled to be in the island nation between September 1 to 15.

In a press statement, the Chairperson of the African Union Commission, Dr. Nkosazana Dlamini Zuma, said the deployment of the first-ever women observation mission by the AU is in line with the organisation’s commemoration of the ‘African Year of Human Rights with a Special Focus on the Rights of Women.’

“The mission will also offer recommendations for improvement of future electoral processes in the country based on observer findings; and ensure that the conduct of genuine elections contributes to the consolidation of democratic governance, peace and stability in the country,” the statement adds.

Locals – CDWS and ARID are ready

The Citizens Democracy Watch Seychelles (CDWS) launched its mission on Saturday, confirming the deployment of 26 observers in eight zones on the island of Mahe, Praslin, La Digue as well as outer islands, over the three days of voting.

Leading up to the elections, CDWS has been conducting a number of training for its members as well as other stakeholders involved with the electoral process. One such session was held on Saturday, conducted by facilitators from the Electoral Institute for Sustainable Democracy in Africa (EISA).

“The training will deepen participants’ knowledge and understanding of the principles of the democratic elections as well as international and regional benchmarks governing lections,” the chairperson of CDWS, Eline Moses said to SNA.

CDWS said it has also been actively conducting voters’ education at post-secondary institutions under an EU-funded project, and this is being done in partnership with Citizens Engagement Platform Seychelles (CEPS) and other local observer group Association for Rights, Information and Democracy (ARID).

ARID launched its observer mission last week and has 35 observers, who according to their spokesperson, Jules Hoareau, have also been following training on electoral laws of Seychelles and election methodology.

The local observer group has chosen “Enhancing legitimacy, promoting democracy” as the theme for the exercise. “We have explained to them the importance of not only observing polling on the three days but observes the whole process, prior to polling day and after polling as well”, Hoareau told SNA.

ARID also met with the Electoral Commission last week where it addressed some of the recommendations made at the end of last year’s elections.

“We are pushing for the setting up of a mediation mechanism for dispute, for all ballot papers to be reconciled and recorded and for results to be posted outside polling stations after counting”, said Hoareau. “We reinforced the point that the Electoral Commission need us citizen observers to bring credibility to the electoral process.”

Both local observer groups have called for tolerance, respect of others’ opinions and for the electoral code of conduct.

CDWS was formed in 2011 and will be observing its fourth election process in the 115-island archipelago in the western Indian Ocean, while ARID which was accredited ahead of last December’s presidential vote will be observing the electoral process for the second time.

The 2016 legislative polls in Seychelles will kick off on Thursday with voting on the outer islands and at special stations. The majority of eligible voters will head to the polls on Saturday September 10.

Two political parties are fielding candidates for all 25 electoral districts, while a third party has a line-up of 23 candidates. Three independent candidates are also contesting the vote in three different districts.