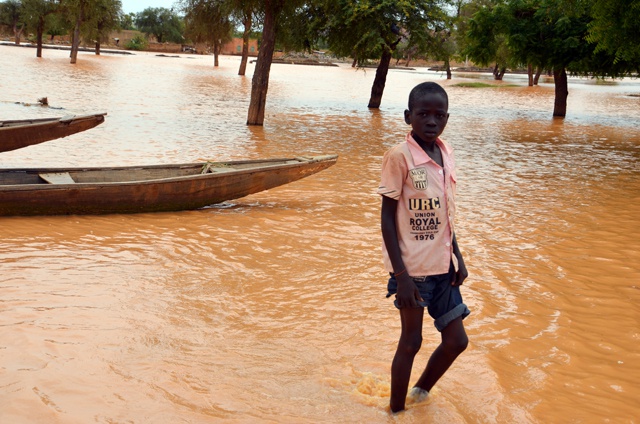 File Photo: A young boy walks a flooded street on September 5, 2013 in a district in Niamey where floods caused 26 casualities and affected 75,347 people and 13,000 hectares of farmland with damages estimated to 32 billion francs CFA (48.8 million euros), according to a statement. (AFP PHOTO / BOUREIMA HAMA)

(AFP) - At least 38 people have been killed and more than 92,000 left homeless since June in disastrous floods in Niger, the United Nations said Wednesday.

The UN Office for the Coordination of Humanitarian Affairs said the deaths, up from a previous government toll of 14, followed torrential rains in August.

More than 26,000 livestock have been lost and more than 9,000 homes destroyed, the UN said, citing government figures.

Authorities and NGOs have already given out aid to more than 50,000 people, the UN added, with many of the homeless sheltering in schools and public buildings.

Despite being in the middle of the desert, Agadez in the north and Tahoua to the west are among the worst hit regions, along with Maradi in the south.

Niger is in the midst of its annual rainy season, having struggled to overcome a severe food crisis caused by drought.

One of the poorest countries on the planet, its authorities are also struggling with 300,000 refugees and internally displaced people who have fled the Boko Haram insurgency in Niger's southeast and in neighbouring Nigeria.