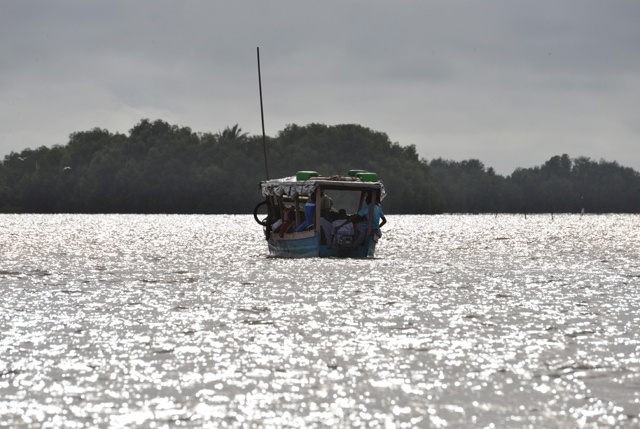 File Photo: People ride a fishing boat off the coast of the Ivorian town of Grand Lahou, situated where the Bandama River meets the Gulf of Guinea, on October 15, 2015. Two Chinese boats face huge fines for illegal fishing off Guinea. (AFP PHOTO/ISSOUF SANOGO)

(AFP) - Two Chinese vessels face huge fines after being caught fishing illegally in Guinea's waters, including one fine of up to $3.4 million, the country's fishing minister said Thursday, as west Africa attempts to crack down on millions lost to foreign trawlers.

The Chang Yuan Yu 6 and Lu Jiao Nan Yuan Yu 102 were among 14 vessels identified as operating illegally in a joint operation mounted by Gambia, Guinea, Guinea-Bissau and Senegal between August 28 and September 1 as part of a European Union-backed initiative.

The Chang Yuan Yu 6 was escorted to port and held there, said minister Andre Loua, while the second vessel escaped.

The boats were guilty of "unauthorised fishing in our economic zone without the required licence," Loua said.

The maximum penalty of one million euros ($1.1 million) would be applied to the captured vessel while the second had the maximum doubled for the aggravating factor of fleeing.

The crew of the first vessel have been freed, according to the minister.

The same company owns the two ships but its name has yet to be disclosed.

Experts have recently warned west Africa is missing out on vital income because of the masses of fish taken from their waters by trawlers from as far afield as South Korea.

A lack of government transparency in the region, limited capacity to patrol the seas and legal loopholes once west Africa's fish arrive in Europe, its biggest market, all contribute to the situation.

The sale of fishing rights to foreign operatives netted Africa $400 million in 2014, according to the UN's Food and Agriculture Organization, but could in theory generate $3.3 billion if the continent's own fleets caught and exported the fish.