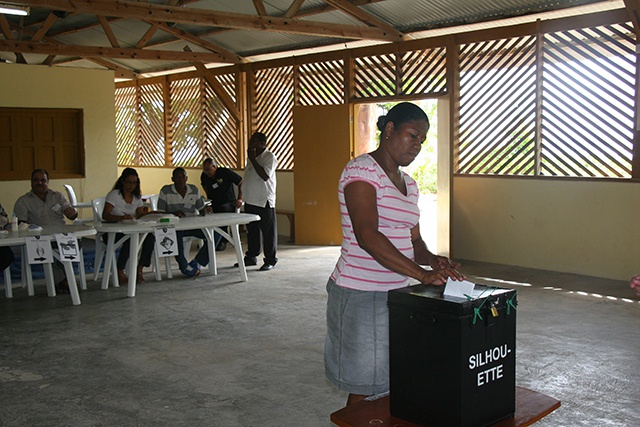 (Seychelles News Agency) - Voters on seven outlying islands cast their ballots on Friday on the second day of elections for the Seychelles' sixth National Assembly as the island nation's three-day election period headed for its most important day on Saturday, when the majority of the island population would vote.

The main voting will take place on the islands of Mahe, Praslin and  La Digue on Saturday from 7 a.m. to 7 p.m. Last-minute physical preparations for the main day of voting were being finalized.

“We are generally ready. All the sorting out of various stations is ongoing. They are picking up their equipments, all the documentations and paper works. Early morning tomorrow, they will pick up their ballot papers,” the chief electoral officer, Joseph Athanasius, told SNA,.

“If we have an 80 to 90 percent turnout tomorrow, we will be expecting to see around 58,000 to 60,000 people,” predicted Athanasius, who is advising the public to turn up and exercise their civil duty as early as possible.

“The election process ... today is quite similar to what went on yesterday, with the exception that all the voting is on the outer islands and there is no voting on Mahe.”

The three-day election period for the sixth National Assembly of Seychelles, an archipelago in the western Indian Ocean, started on Thursday, when an expected 5,000 people voted in 14 special polling stations, including on the main island Mahe, the second-largest island Praslin, the third-largest island La Digue, Silhouette and seven outer islands.

The last ballot box from the first day’s voting came in at around 9.30 p.m. from the English River polling station and Athanasius said that tallying of ballot papers is still ongoing.

“The process went quite smoothly for the first day. We are quite satisfied with what happened yesterday. We didn’t receive any major issues," said Athanasius.

“People [were] coming with ID on which the photographs are distorted and we couldn’t recognize their face. There were ways of getting around that. We were telling people to get another identification document or somebody to vouch for the person,” he told SNA.

The chief electoral officer said 600 people have been mobilized to work directly with him in the electoral process.

“If we were to include the police, security services, drivers and others, it will easily add up to 2,000,” added Athanasius.

There are 71,932 eligible voters who can vote in 25 constituencies in the three-day election.