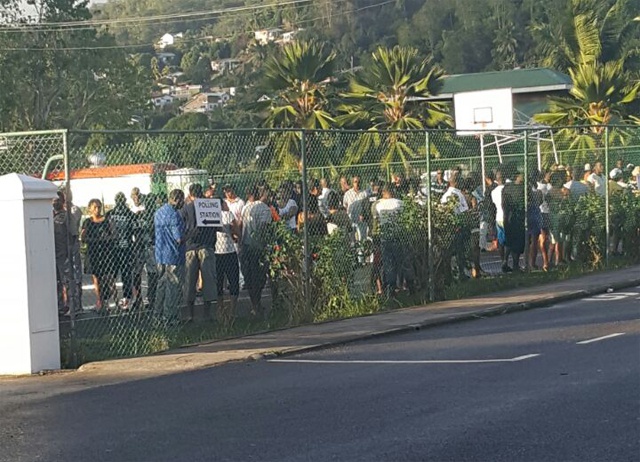 Voters waiting to cast ballot ahead of the 7.00 a.m. opening of the voting station at Anse Etoile, the largest electoral district in Seychelles. (Madiha Philo, Seychelles News Agency)

(Seychelles News Agency) - Voters in Seychelles cast ballots Saturday in the third and final -- and by far the most important -- day of voting in the island nation's highly contested National Assembly election.

Residents queued at polling sites across the nation's three most populated islands. Votes can be cast between 7:00 a.m. and 7:00 p.m.

At Anse Boileau – a district in western Mahe, some people who spoke to SNA had arrived at the polling station as early as 6.00 a.m.

“I came this early because in the morning it is much cooler and I have a lot of things to attend to at home,” said Daniel Servina, a 55-years old voter.

A first-time voter Emelie Pool said “although the queue was really long, the voting process was moving really fast. It is faster than last December’s presidential elections.”

Compared to previous elections the Electoral Commission has introduced a new system whereby voting lines have been divided by alphabetical sections of the voters’ register.

Varinie Etienne who was accompanying her grandmother who cannot vote on her own is of the view that the previous system was better.

“If you are assisting someone and that person's surname begins with 'M' and yours starts with 'E', [the assistant is] requested to queue up again outside whereas before you could both vote at the same time,” said Etienne.

The chief electoral officer, Joseph Athanasius, who confirmed the readiness of the Electoral Commission on Friday, has advised the public to turn up and exercise their civil duty as early as possible.

SNA was at the Plaisance polling station, on the outskirts of Victoria shortly after 9am and there was no queue.

Three voters who spoke to SNA said they were impressed with how fast the process was moving along.

“I spent seconds inside [the voting station], which is completely different from December’s presidential elections, where I had to queue for hours,” said Antoine Alcindor.

Lauren William and Ericson Joseph, both 74, said as soon as they arrived at the station they were ushered in and were able to cast their votes.

“What a welcome improvement from last year especially for us the elderly who did not have to wait for hours to cast our votes,” both men told the SNA.

The electoral in charge of the Plaisance polling station, Thomas Dauban said the only hiccup encountered was one person who could not vote as his name did not appear on the voters’ register.

“It has been a smooth process since we opened our doors at 7am and I am satisfied with the way things are going,” said Dauban.

Two hours after voting started at Plaisance, around 600 people had cast their votes.

At the Mont-Fleuri polling station at 9.30am, voting was going at a fast pace and some 450 people had already voted.

“I was in the queue for roughly one minute and there was no hiccup while I was voting. It is more organized than December as the register has been divided into three,” Gretel Isaac told SNA.

A total of 71,932 people can take part in the legislative polls, although over 5,000 were expected to cast their votes on the first two days of voting.

Candidates from three political parties and three independent contenders are contesting the 25 directly elected and additional proportionate seats in the sixth National Assembly.

Anse Etoile – a northern district of mainland Mahe is the largest constituency with 4,126 registered voters, while Roche Caiman – on the outskirts of the capital Victoria -  is the smallest with 1,972 voters.

At Anse Etoile people were in the queue as early as 4.00 a.m. to perform their civic duty.

Erica Labrosse, 52, said she left home before the crack of dawn to avoid standing in the queue for a long time.

“The voting process went quite fast for me and I hope that the process remains calm and peaceful as it has been until now,” Labrosse said to SNA.

Isaac Cesar, 71, said “voting was a bit better compared to the previous ones, which shows that an effort has been made to improve this process.’

The electoral officer in charge of the Anse Etoile voting station Douglas Accouche told SNA that 211 votes cast at special voting Stations on Thursday and Friday were counted and added to the tally of votes before the voting station was opened.

“‘We had to count each and every one of the ballot papers one by one in the presence of the candidate themselves and their agents… they were all satisfied,” said Accouche.

“Voting started right on time and I think we are doing quite well with the new system [diving voting lines by alphabetical order of the voters’ register] that has been introduced and I hope that we are able to proceed fast enough to finish by 7.00 p.m.” said Accouche.

The legislative elections in Seychelles, a group of 115 islands in the western Indian Ocean, saw voters cast ballots Thursday and Friday at special voting stations and on the more remote islands.

The Electoral Commission has explained that votes already cast at the various special stations will be dispatched to the respective constituencies on Saturday to be included with other votes cast on the main polling day.

Parliamentary elections in Seychelles are held every five years.

The ruling Parti Lepep, which has a majority in the current assembly, having won all 25 directly elected seats in the last elections in 2011, is fielding candidates for all 25 constituencies. The party is confident of maintaining a majority in parliament. The last parliamentary election was contested by only one opposition group, the Popular Democratic Movement (PDM), which is not contesting the 2016 polls.

Parti Lepep that has always won a majority in National Assembly elections, since the return of a multi-party system in 1993.

An opposition coalition -- Linyon Demokratik Seselwa (LDS) -- is however seeking to reverse the trend and has also expressed confidence that it will win a majority.

The opposition group is also fielding candidates for all 25 electoral districts. LDS is made up of four political parties including the Seychelles National Party (SNP), which boycotted the 2011 polls.

A third opposition party, the Seychelles Patriotic Movement (SPM), which is targeting two proportionate seats, but has predicted a 50-50 chance of winning one or two outright seats, has candidates for 23 of the 25 constituencies. SPM does not have candidates for Takamaka -- a district in South Mahe -- and St Louis -- a central district.

Most voters SNA spoke to on Saturday said the candidates had run free and honest campaigns and that they had gotten the chance to know the aspiring representatives in their respective districts and were heading home to await the results of the election.

This is the second time in less than a year that voters in Seychelles are heading to the polls.

A presidential election which ran into a historic run off was held in December.

The leader of Parti Lepep, President James Michel, was declared the winner with 50.15 percent of the votes against the SNP leader Wavel Ramkalawan who won 49.85 percent. Only 193 votes separated the two candidates.