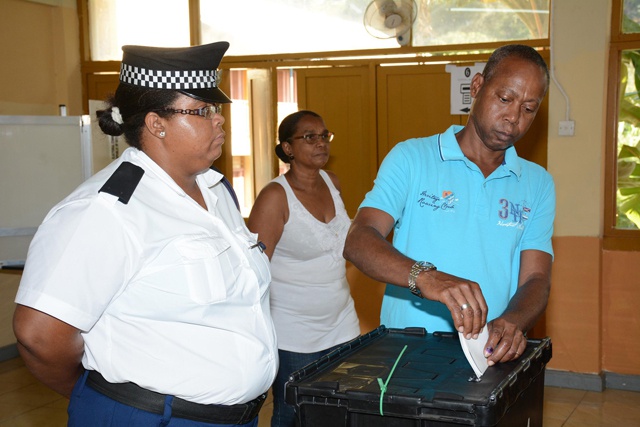 At midday on Saturday nearly 30,000 people had voted out of the 71,932 eligible voters -- about 41 percent of eligible voters. (Patrick Joubert, Seychelles News Agency)

(Seychelles News Agency) - Voters in Seychelles are casting their ballots on Saturday, the third and final day of voting in the island nation's highly contested National Assembly election.

All stations were to open at 7:00 a.m., but the chief electoral officer, Joseph Athanasius, told SNA that a couple stations opened late.

“We have new procedures now following the court’s decision where they (electoral officers) have to call out the names of voters already voted in the special stations and that takes a bit of time,” said Athanasius.

The chief electoral officer added that: “They have to physically count all the ballot papers as a measure to show that what was issued the night before is the same as those that has been returned to the station.”

At midday, Anse Aux Pins in the east of Mahe is the station that had the highest percentage of voters casting their ballots, at 53.7 percent, followed by the central district of Mont Buxton and Grand Anse in the west of Mahe at nearly 50 percent.

The lowest is the central district of English River where only 27 percent of people had voted.

Athanasius said the process in the morning has been slow due to a number of difficulties.

“After many years we are trying the alphabetical system voting again and we are having one or two stations which have experienced quite a lot of problems with it. For the staff themselves it is completely different than what they were used to in the last two elections,” said Athanasius.

Athanasius said that in some stations this is causing frustration among the voters in line but that it has improved by mid-morning.

The electoral commission has also received concerns on the subject of candidates being allowed to observe the election in their constituencies for only 15 minutes.

“The understanding was that this time around the candidates will not be allow to stay the whole day, but candidates didn’t like it so a decision was taken to permit them to stay in accordance with the law but they can’t sit down with their polling agents,” said Athanasius.

Up to now at least half of the number of voters in their respective districts has cast their ballots.

Athanasius says, “We hope that mid afternoon people will get into the swing of things and the process will therefore go faster. We expect that the results will be a bit late.”

Compared to the presidential elections in December the chief electoral officer said: "This is a National Assembly election and we can give results as they come from the polling areas.”

Voting stations are expected to close at 7.00 p.m. after which counting of the ballots will get underway. Final results should be announced in the early hours of Sunday.

Parliamentary elections in Seychelles are held every five years and in the last election -- in 2011 -- the ruling Parti Lepep won all 25 directly elected seats.

An opposition coalition -- Linyon Demokratik Seselwa (LDS) -- is seeking to reverse the trend and the party has also expressed confidence that it will win a majority. The coalition is made up of four political parties including the Seychelles National Party (SNP), which boycotted the 2011 polls